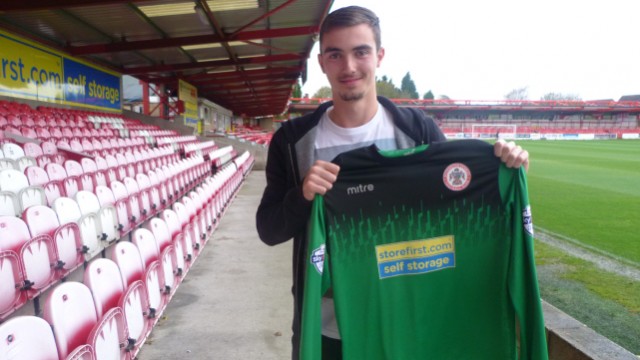 Rose is a Red!

The 19-year-old, who is a regular with the under 21’s side at the Hawthorns, will stay at the Store First Stadium for an initial month.

Rose trained with his new team mates for the first time today and can’t wait to get started.

“It’s been good,” he said. “I’ve been welcomed really well and didn’t feel out of place. I want to hit the ground running and get off to a good start.

“I’ve been at West Brom and coming up through the ranks and this is the next step that I need to take. I feel like this is a great opportunity. Accrington is a great club and I need to take the chance with both hands and take it well.”

Rose arrives following injuries to loanees Aaron Chapman and Jesse Joronen and manager John Coleman believes he can be a success in Stanley colours.

“We’ve been quite fortunate with the loan keepers that we’ve brought in previously but clearly unfortunate this season with all the injuries,” said Coleman. “You only have to look back to Darren Randolph, Carl Ikeme and Rob Elliot to name but a few and they were successful here.

“If I was a young goalkeeper looking to go out on loan I’d just see the success that lads coming here have had and that would lead me to think this was a good career move.

“I know Jack has been very keen to come which is the thing that you’re looking for. You want players who are keen to play football and competitive football. It gives them the opportunity to push themselves up the pecking order at their parent clubs and Jack will have that opportunity with us.

“The goalkeeping coach at West Brom is Dean Kiely who had both Darren Randolph and Rob Elliot as his understudies at Charlton so he knows what type of keeper I’m looking for. Hopefully it’ll work out well for both parties.”

Rose will take the number 26 shirt at the Store First Stadium and subject to ratification could make his debut in the FA Cup at Notts County on Sunday.