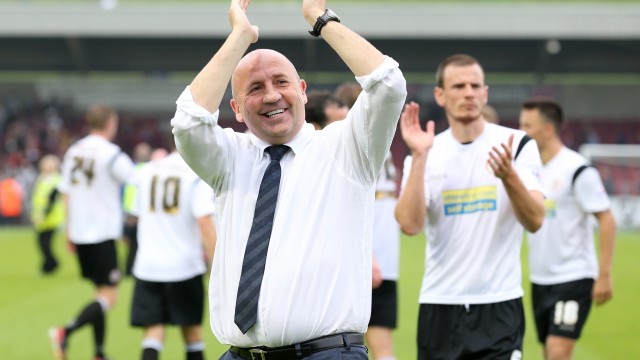 No more pressure on players: Coley

JOHN Coleman will not put any more pressure on his Stanley squad when they take on League One high-flyers Notts County in the FA Cup on Sunday.

The winners of the first round will receive £18,000 and a cash influx can make a big difference to a club like Stanley.

But Coleman is keen to make sure the players treat it like any other game – and, despite being underdogs, go to Meadow Lane full of confidence.

“I am not putting any more pressure on the players because we believe we can win every game and you can only have a certain amount of ‘want’,” said the Reds boss.

“Our players go out next week, like they went out last week and like they will on Sunday – believing they can win the game. We have got a good set of lads here and we go there full of beans.

“While we have a tough draw, Notts County could have had an easier draw than us.  Our form has been great of late and, if we play to our strengths, we can win. To me, it wouldn’t be a cup shock if we beat them.”

The FA Cup always brings back memories of Stanley’s run in the 2003/4 season when Stanley beat Huddersfield and Bournemouth and, in later times, a clash at home with Fulham.

“It would be nice to have a cup run, we haven’t had many,” said Coleman. “Obviously the Huddersfield and Bournemouth one had a big bearing on the future of the club as it helped us go full-time and it’s the reason why we are where we are today.

“Then there was the Fulham one where we were unfortunate to lose but it would be nice to have another one and it would bring much needed coins into the coffers.

“I think the hardest thing is when you’re out and it’s the second round and you are not involved – that’s what we have to hammer home to the players, that we have got to be involved in the next round.”