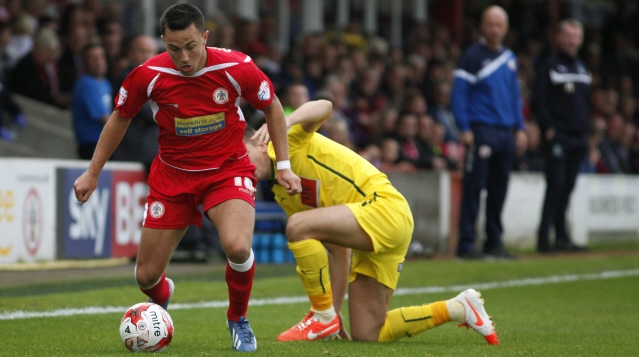 O’Sullivan: fans spur us on

John O’Sullivan believes vocal support from the stands has been the key to Stanley’s good home form this season and wants that to continue for tonight’s clash with Exeter City.

Since John Coleman returned to the club – and O’Sullivan joined on loan from Blackburn – the Reds have won five of six games at the Store First Stadium, with that defeat the only one at home since the opening day of the season.

O’Sullivan feels that the fans make all the difference.

“The atmosphere’s excellent,” explained the midfielder. “Especially that group behind the goal (at the Clayton End) where the flags are flying. They’ve been excellent. Every time I get the ball you can hear the excitement which is a big help.

“As an attacking player that gives you that little extra drive when you get the ball. You want to run at people when the fans are cheering you on.

“You want to make your home stadium a fortress don’t you? You want teams dreading coming here after looking at our form. I can’t see many teams coming here and beating us to be honest. We just have to keep that going now.

“The one defeat we had, against Dagenham, I think we should have won. Any team that does come here and get something, we want to make sure they are crawling off the pitch with what they have. We’re fully confident when we play at home with the fans behind us.”