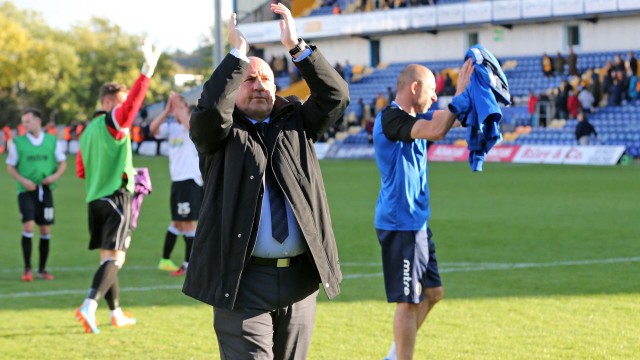 John Coleman wants his Stanley players to rediscover their attacking flair tomorrow night and book their place in the second round of the FA Cup in the process.

The Reds saw their four match unbeaten run come to an end at Carlisle at the weekend as they failed to score for a second successive game.

Notts County will hope to end Coleman’s hopes of a tie with Yeovil but he’s confident that a team that scored five times at Northampton in his first game back at the club can do damage to the League One side.

“We have to go through it and maybe we have to change the system that we play in order to try and be more of an attacking threat against Notts County,” said the manager.

“We’ll give it our best shot. What I want us to do is to play with a bit of energy, passion and attacking force so that, whatever the result is, we leave our fans feeling satisfied.

“If you’re going to lose and you get carried out on your shield then you can accept it and it’s easier to move on to the next game.

“I’d take a diabolical performance and a 1-0 win but I don’t think we’re capable of that.

“I want us to play to the way I know we can play: with the appetite, the passion and the attacking flair that I know we’ve got and see where it that takes us.”

The teams drew 0-0 at Meadow Lane in the first game and will know all about each other though Coleman feels there may be a temptation for the Magpies to change things.

“They might approach it differently,” he explained. “Obviously the away form they have is second only to Chelsea so we know it’s going to be a tough game but our home form is quite good so we’ve got to hope that we can get ourselves going and lift ourselves.

“They’ll do well to go all season without losing away from home so let’s hope that we’re the ones who spoil it.

“We’ve had some great times in the FA Cup but we’ve also had some shockers. We don’t want to be going down that road. We want to go out all guns blazing and whatever happens happens.”