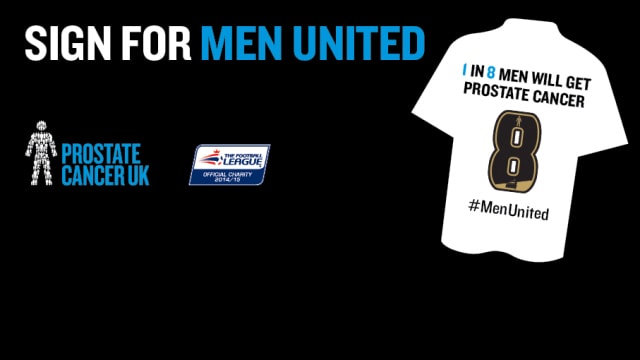 Stanley have your backs for cancer charity

“We’ve got your back”. That’s the powerful message from Prostate Cancer UK to Accrington Stanley this season.

The official logo of the pioneering charity will be worn more than 60,000 times on players’ shirts in the Sky Bet Football League this season, following a unique agreement between The Football League and its official charity partner.

Within each and every number will be the charity’s iconic image, the Man of Men, symbolising men of all walks of life coming together in the UK.

Supporters of all 72 Football League clubs will support for the formidable Men United as they plan to give prostate cancer a real beating this season.

So what’s in a number?

One in eight men are affected by prostate cancer in the UK every year while one man will die every hour.

More than 187,000 people have signed for Men United – which would fill the Store First Stadium more than 30 times – while representatives from clubs raised more than £210,000 completing the London to Amsterdam cycle challenge in June.

Football League Chief Executive, Shaun Harvey said: “The Football League is delighted to make this extensive commitment to helping Prostate Cancer UK tackle one of the biggest threats to men’s health. Working together in this way will help save people’s lives.

“I hope it helps raise awareness of the important work they do and encourages more supporters to get a better understanding of the risk that prostate cancer poses.”

Prostate Cancer UK’s Director of Fundraising, Mark Bishop added: “There is an old phrase about safety in numbers when you face a common enemy, and Men United is all about men coming together to fight prostate cancer.

“Every time a player pulls on a Stanley shirt with a squad number featuring our Man of Men they are helping to save lives. They are raising awareness of an issue that for far too long has been hidden away. Players and fans are supporting for the 250,000 men living with prostate cancer and the 40,000 diagnosed with the disease each year.”

Later in the season, Accrington Stanley fans will be encouraged to sport a moustache for the annual charity event, Movember, and there is a plethora of activity across The Football League in March and April at Men United match days, and teams will again be invited to saddle up for the third London to Amsterdam Challenge on 12-14 June 2015, and lead their club into Europe.

If you have concerns about prostate cancer please call Prostate Cancer UK’s confidential Helpline on 0800 074 8383 or visit www.prostatecanceruk.org. The helpline is free to landlines, staffed by specialist nurses, and open from 9am to 6pm Monday to Friday with late opening until 8pm on Wednesdays.