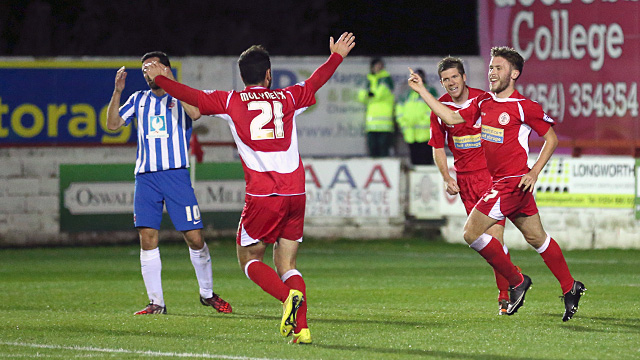 The Northern Irishman scored twice in the victory, opening and closing the scoring with his first goals of the campaign.

He said: “It’s great to get on the scoresheet. It wasn’t the best performance but we grafted and got the three points which is the most important thing.”

McCartan’s goals were at opposite ends of the spectrum in terms of style: the first a curler into the top corner at the end of a mazy run that bamboozled a string of Hartlepool defenders; his second a poacher’s effort, slamming home from a few yards amidst a goalmouth scramble.

“I don’t really remember the first to be honest!” he laughed. “I remember running at the defence but I didn’t even see it go in because I was looking down at my feet.

“The second one I just hit and it took a slight deflection and went in.”

After playing a bit-part role last season, the winger hopes that the brace can act as a springboard for a hot run of form under new boss John Coleman.

“I probably didn’t have the confidence when James Beattie was here, which was purely down to myself.

“I just wasn’t confident, but I played against Manchester United the other week and then played against Sligo and did well in both games which raised my confidence so now I just need to keep it going.

“I don’t know what’s changed; it’s hard to explain. You can do one tiny thing in training and your mindset completely changes – you believe that you can do well at this level.”

The win at the Store First Stadium ended a run of two consecutive defeats for the Reds and it was a relief for the winger that the team got back to winning ways so quickly.

He said: “We played alright against Dagenham and were a bit unlucky to lose the game but it was a poor performance against Stevenage. Like the gaffer said, we were a bit lethargic but today we came out, showed a lot of passion and wanted to win the game.

“I wasn’t sure if I’d start tonight but Hunty pulled out which gave me my chance and I think I took it. I need to take each game as it comes, though, and hopefully get on a good run of performances so the team can move up the league.”