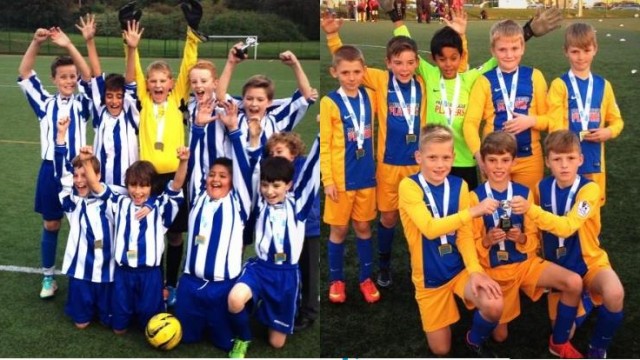 Our Kids Cup competition for the 2014/15 season burst into life this week as our finals line-up was confirmed!

The Kids Cup is an under 11 football based tournament which all community trusts across the country run on behalf of the Football League Trust. Each Community Trust organise their local competitions, with each winner representing that football club at the Regional Finals, with a chance to get through to the National Finals, played at the home of English football, Wembley Stadium!

In the first of our borough tournaments, schools across the Ribble Valley came together at Clitheroe Royal Grammar School last Friday. With the competition strong from the start, it proved a tight affair.  The majority of group winners and runners up came down to goal difference along with most of the quarter, semis and finals resulting in penalty shootouts. Making it through to the final were both Mellor St Marys and St Marys Langho. The game proved to be a tight affair, with Mellor St Marys prevailing on penalties with a few nerves of steel!

In the second of our borough tournaments, both Hyndburn and a number of schools from the Rossendale area gathered at Accrington Academy on Monday evening. This looked a particularly difficult competition to call with many schools currently on form in the current HRVSSP monthly league and including our 2013/14 Kids Cup Winners St James the Less. With schools being whittled down, the final saw Peel Park face a strong Huncoat side, with the latter prevailing after a hard fought 2-1 win.

All four teams will now take part in our finals event during half time at Stanley’s home match vs Northampton Town on Saturday 31st January 2015. The finals stage will look as follows:

Good luck to all four teams and especially to both Huncoat and Mellor St Marys, to see who represents Accrington Stanley at the Regional Finals tournament in Morecambe early next year!

Accrington Stanley Community Trust would also like to say thank you to HRVSSP and all the schools across the Ribble Valley, Hyndburn & Rossendale who all made such a fantastic competition happen: