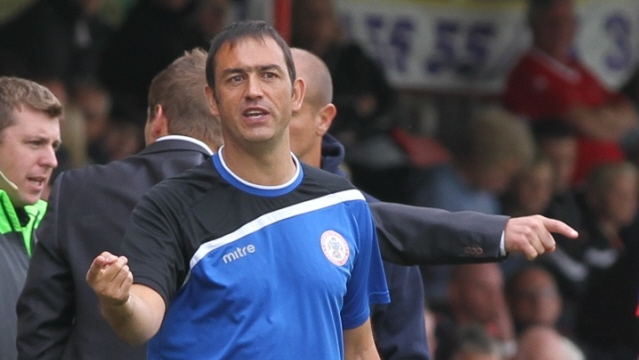 PAUL Stephenson was in a reflective mood after Stanley’s 3-1 defeat at Oxford where the interim manager admitted ‘That wasn’t us.’

Stanley conceded sloppy goals at the Kassam Stadium and will now lose James Gray for three games after the striker was sent off in the 37th minute. Adam Buxton also suffered concussion and was substituted at half-time.

“That just wasn’t Accrington Stanley,” said Stephenson. “But all we can do is draw a line under that performance and move on.

“In the last 15 months we have been hard to beat and we erred off our game plan tonight.

“We conceded the first goal, reacted well with Marcus Carver’s goal and just needed to get through to half-time as the crowd were booing them.

“But then there was the sending off and the second goal was ridiculous from our point of view and it’s always an uphill battle after that.

“Luke Joyce has held his hand up for the third and we will never hold it against him – he is always a seven or eight every week – but the third goal killed us.

“We will pick ourselves up though. It is disappointing as I have lost James Gray for selection for three games and it’s difficult to lose a player of quality but we will bounce back.”