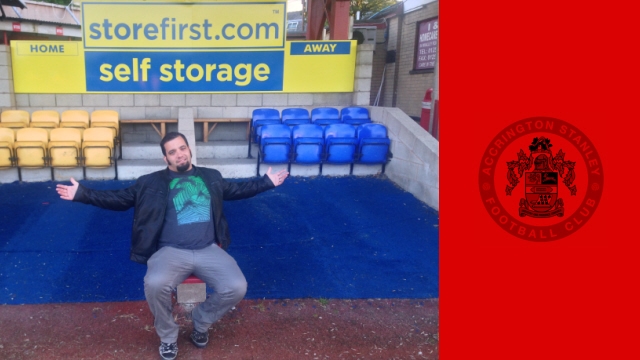 American TV star Jesse McClure is limbering up to kick off a crossbar challenge at Accrington Stanley FC in a bid to help raise £10,000 for the club.

The Californian star of cult show Storage Hunters, which airs on Dave in the UK and attracts millions of worldwide viewers, will make a special guest appearance at ASFC’s clash against Plymouth Argyle on Saturday 27 September at 3pm.

And he’s guaranteed to get a touch of the ball as he kicks off a half-time crossbar challenge, with the club set to receive £10,000 in much-needed funds if Jesse’s shot is on target. The challenge is being sponsored by Burnley marketing agency Scott Dawson Advertising, who have offered to contribute the cash to support the club.

The money raised will be put towards a new van to transport players to training sessions.

Football fan Jesse announced that Accrington Stanley was one of his favourite UK teams during a live appearance on Sky Sport’s Soccer AM earlier this year.

Jesse will be in hospitality before the Plymouth game for a VIP meet and greet – tickets are still available at £60 a head – contact commercial@leescarter.com or call 01254356950 to book your place.

During the match, he’ll join Stanley fans in ramping up support for the side, then following the game he’ll take part in a Q&A session and a Storage Hunters-style auction in the Crown pub.

He said: “I love soccer and I love the people of Accrington so when the club got in touch and asked me to step and try my luck at the crossbar challenge I was only too happy to help.

“It’s gonna be an awesome day and I can’t wait to meet all those loyal Stanley fans in person. Come along and get involved!”