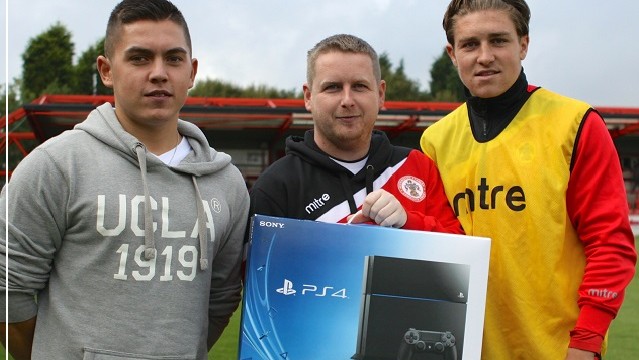 A GREAT Harwood teenager has turned his life around thanks to Accrington Stanley.

Brandon Cocker, 18, admitted he felt he was going nowhere when he left school two years ago and was overweight at 16 stone.

However he trimmed down to 12 stone after learning about nutrition on Stanley Trust’s BTEC Level 3 Extended Diploma in Sport where he undertook a futsal scholarship.

And TVS Education, who run the futsal programme at Football League clubs, presented him with a Playstation 4 after he got their top qualification and they made him their UK Student of the Year.

“It did change my life,” admitted Brandon, who is now going onto study Sports Coaching and Business.

“I wasn’t inspired at school and to be honest, I was lazy. I always wanted to do something with sport and I heard about the Stanley futsal scholarship, went to the open day and was impressed.

“When I started the course, I was 16 stone and I guess I was grumpy and lazy. But I started training every day, learning about nutrition and the fitness industry and it really spurred me on. I think I am unrecognisable from the teenager who left school.

“I thoroughly enjoyed the course, it showed the path I wanted to go down and I guess I thrived on doing subjects I enjoy.”

Stanley and Blackburn fan Brandon graduated with the highest score possible – a triple Distinction Star and it led to him being selected as the top futsal pupil in the UK.

“I was shocked when I was told,” said Brandon. “I couldn’t believe it and to get a Playstation 4 is great.”

Education Officer Alan Phillipson admitted they took a risk on Brandon – and it has paid off.

“Brandon asked to go on our course but he didn’t get the GCSE’s he needed. We wrote to the funding providers and they agreed to take a chance on Brandon – and it was one of the best decisions they made.”

Brandon was one of the first crop of students to graduate from this new course with seven of the 11 graduating this year going onto university.

They are now taking on their new group of students and have five places free.

“We had 20 students  – our maximum number – signed up to start this month but unfortunately we have had to reject five due to their GCSE results, it has become a lot stricter,” added Alan.

“So we do have five places for the next scholarships and we can recruit until October.”

Anyone who wants more information about the BTEC Level 3 Extended Diploma in Sport, which is overseen from Swindon Academy, contact Alan on 07940 882388 or email info@stanleytrust.co.uk.