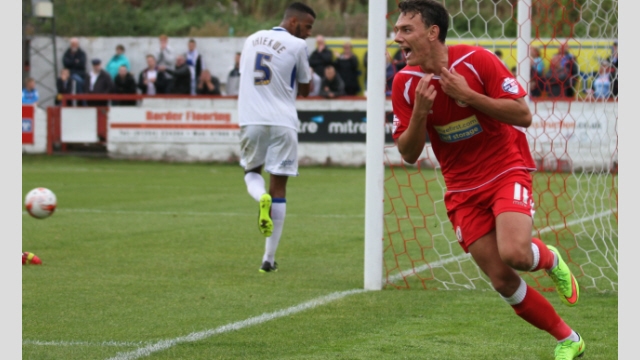 Kal Naismith scored a late winner as Accrington Stanley came from a goal down to beat Tranmere Rovers 3-2 and record their first win of the season.

James Gray’s penalty opened the scoring but Tranmere hit back to lead through Abdulai Baggie’s brace before Gray completed his own brace and Naismith plundered all three points with eight minutes remaining.

There were four changes from the Johnstone’s Paint Trophy defeat to Carlisle with Jordan Mustoe, Josh Windass, Will Hatfield and George Bowerman dropped. Replacing them were Nicky Hunt, Piero Mingoia and James Gray. Andy Procter was thrust straight into central midfield after rejoining the club on deadline day.

Nicky Hunt went into the book just a few minutes into the game for bringing down Eliot Richards as the striker looked to break clear of the full-back. Richards then fired an early warning for the visitors, shooting just wide of the post from 20 yards in the opening stages of the game but it was Stanley who would take the lead.

Adam Buxton and Kal Naismith exchanged passes on the wing before the Scot burst into the area, drawing a foul from Janoi Donacien to leave the referee with no choice but to point to the spot.

Gray stepped up and, although Tranmere’s debutant goalkeeper Peter Brezovan got a hand on the strike, there was too much power and the ball found the top corner.

The game became a war of attrition in midfield with neither side creating any clear-cut chances though Stanley were having the lion’s share of possession.

Naismith had a shot from 25 yards but it lacked conviction and was comfortable for Brezovan to collect before the visiting goalkeeper had a kick charged down by Gray but the ball rebounded off the striker and bounced wide.

Marcus Carver then beat Michael Ihiekwe to a bouncing ball in the area but couldn’t find the target with his lob as Stanley took the lead into the break.

However, the lead would last barely a minute into the second half as Abdulai Baggie raced onto Max Power’s through-ball and nutmegged Lumley to level the score.

Richards threatened to give Tranmere the lead as he looked to get on the end of Marc Laird’s pass but Lumley was off his line and won the 50/50 challenge with the attacker.

At the other end, Gray shot narrowly wide of the post from Marcus Carver’s knockdown but Tranmere would take the lead with the next attack.

It was the same process and outcome that led to the visitor’s first goal as Baggie ran onto a through-ball from Richards, rounded Lumley and slotted into an empty net.

Stanley fought back and got themselves on level terms as Gray nodded in from close range after Carver flicked on Hunt’s cross.

Four minutes later, the Reds had completed a sensational turnaround to lead 3-2. Adam Buxton cut inside and hit a shot that had too much power on it for Brezovan to handle and the Scottish winger pounced to pilfer a winner from four yards.