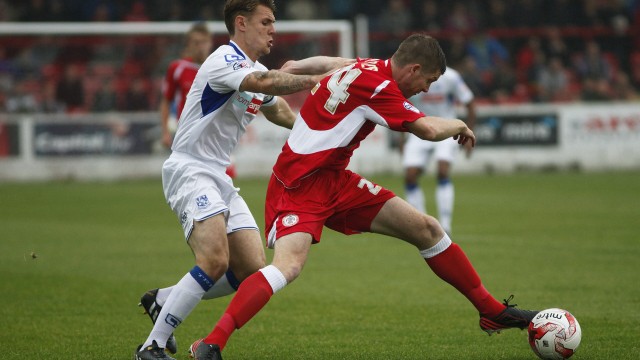 Proc Looking To Kick On

Deadline day signing Andy Procter was delighted to pull on the Stanley shirt again against Tranmere and is looking to get stronger and stronger with every game he plays.

The former skipper returned to the club last week following his release by Bury, signing a two year contract.

Now he’s aiming to make up for lost time and get himself up to speed out on the field.

“I just need to get some more games under belt and get my match fitness where I want it to be and I would like to think I would be a big asset to the club,” he explained.

“It has been tricky. I went from one manager (John Coleman) in nine years who knew me inside out to having five managers in two-and-a-half seasons.

“I was a captain at both Preston and Bury but managerial changes meant differing opinions – football would be boring if every manager liked the same players – but it has made me mentally strong and I have the belief in my own ability.

“I believe I am a good player at this level and it’s up to me to prove it and get us up the table.” 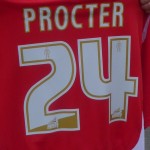 Andy Procter is available for sponsor – meaning that at the end of the season you can get the shirt off his back!

The 31-year-old has returned to the Store First Stadium and for just £120 you can become his player sponsor. Player sponsors receive their player’s match worn shirt at the end of the season, as well as their name in the programme and website alongside their chosen player.

This is a great way to support your favourite player or advertise your small business and with home and away shirts available for all players, you have double the chance of getting your favourite.

To find out more information or to sponsor your favourite call 01254 356950 or email commercial@leescarter.com