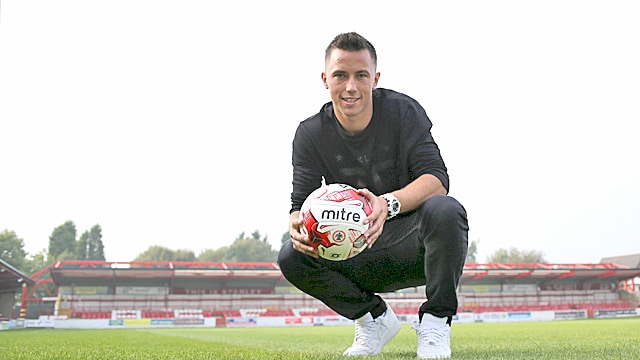 Republic of Ireland Under 21 international O’Sullivan, 21, has been reunited with Coleman after the Reds manager took him on loan while he was in charge at Conference side Southport last season.

“As soon as I heard John was getting the Accrington job I wondered if he would bring me with him and the first day he got the job he rang me and asked me if I wanted to come, which I couldn’t turn down,” said O’Sullivan.

“John took me to Southport and I was there for a few months and he has seen the potential in me, the player I am and what I have to offer for the team.”

O’Sullivan made his Blackburn debut against Birmingham on the final day of the 2012/13 season and was on the fringes of the first team last season until he got injured.

“I was getting a chance at Blackburn, I played at Birmingham and then all the pre-season games last year, but the last pre-season game I picked up an injury which killed me.

“But John was good enough to give me a chance at Southport and now he is giving me a chance in the Football League.

“(Blackburn boss) Gary Bowyer knows the potential I have and he knows that what I need now is the Football League experience which Accrington is going to give to me.

“I need that experience of when you have to win, when people’s jobs are on the line

“It’ a good atmosphere here, I played in the pre-season friendly between Blackburn and Accrington and as soon I got the opportunity to come here I couldn’t turn it down.”