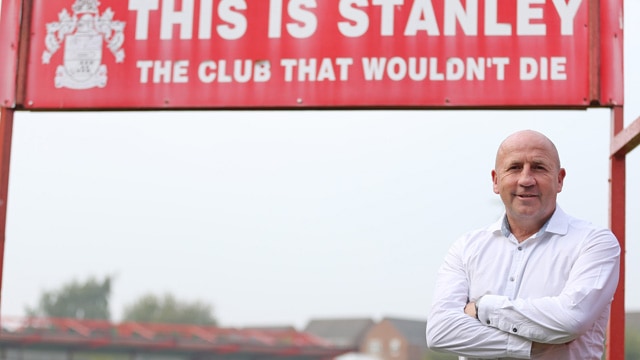 John Coleman is relishing a return to the Store First Stadium tomorrow as he takes charge of a Stanley home game for the first time since January 2012.

The new manager will be in the dugout for the game with Plymouth Argyle and is eagerly anticipating being back in familiar surroundings.

“I’m hoping it will be a great experience,” said Coleman. “I’ve been really looking forward to it. It’ll be special and I hope that the fans get behind the players for the performance they put in last week. We want to get back to the special days when we were here last time and in the last three years we were here we played some great football and were pretty much continuously in the top half.

“That’s what we want to get back to and the fans play a huge part in that. They might think that they don’t and that this is all hot air but it’s not. They can create an atmosphere that can put the opposition off and boost our players an extra ten per cent and when you’re talking about fine margins that can be the difference between drawing and winning or losing and drawing. We need all the help that we can get.

“The noise that a small number made at Northampton was superb and that’s something we’ve always known. We don’t expect anything different. It’s probably only when you come away from it that you miss it and we want to hear that drum and those songs again.”

Coleman and Jimmy Bell have been back at the club for just over a week and the manager believes they’ve quickly got up to speed with what they have inherited and the state of play in League Two.

“We’ve learned lots of things,” he explained. “We’ve got a good squad of footballers; good characters and good people. We’ve watched videos of various teams in the league and we know that it’s very tight and we know that it will be tight going through the rest of the season.

“There aren’t a great deal of stand out teams good or bad and the gap between the top and the bottom is getting smaller and smaller. You have to get the points on the board quickly firstly to get you away from danger but also to get you into the mix higher up.

“We don’t want to have ten points after ten games. It’s a chance for us to get ourselves into the upper regions of this table but we know how vital every point is.”

Visitors Plymouth are three points and five places better off than the Reds ahead of the game and Coleman expects it to be a difficult test for his players.

“Plymouth are a good side and John Sheridan is doing a good job there,” he added. “They’re a massive club and I fully expect them to be in or around the play-offs come the end of the season. John’s got them playing and winning and we know it’ll be tough.

“In the past Accrington Stanley always relished big clubs coming to our ground and it always made us raise our game. When you’re playing bigger teams you can get a little bit more from your players and that’s what we’re hoping for this weekend.”