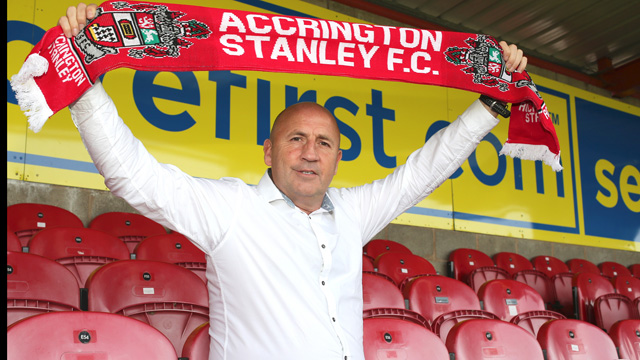 Chris Wilder’s side are fifth in the League Two table and hammered Hartlepool 5-1 on Tuesday night but Coleman doesn’t feel that’s any reason to be pessimistic.

“I’m not going to Northampton saying that because they won 5-1 in the week they should beat us,” he explained. “I’m pleased that they are playing swashbuckling football at the moment. Maybe they’ll believe that given our league position at the moment that we’ll be a cake walk.

“I’m really looking forward to it. I hope our players express themselves and do really well.”

Coleman has had two days to work with his new set of players since being re-appointed and has added Blackburn midfielder John O’Sullivan and West Ham forward Sean Maguire to his squad.

He’s impressed with what he’s seen so far and can see plenty of potential in the group.

“The players have been fresh in training and it’s been a different experience,” he continued. “Someone asked me in an interview this week if I envisage it being different this time because we brought all the players in first time around and it will be different but it might work better to be honest.

“Over the years we’ve brought in hundreds of players and you can dictate to them more and tend to always offer your opinion. One of the things I’ve learnt from my coaching and Jimmy has embraced too is to let players think for themselves, express themselves and offer their opinions.

“At the end of the day when they’re on the pitch it isn’t Subbuteo. They have to be able to think for themselves. You get better performances when players make the right decisions more often and we’ve got to give them the facility to improve their learning and decision making.”