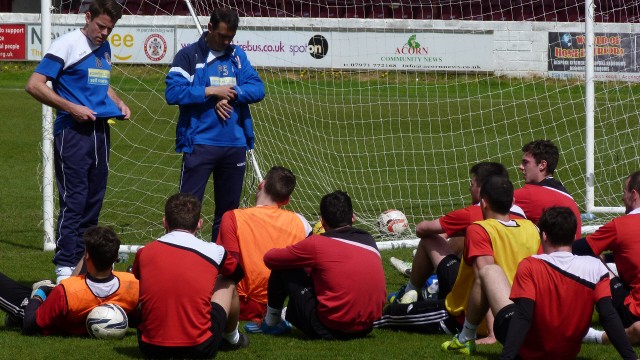 Stanley assistant manager Paul Stephenson believes that positivity in the camp will help the players go to Shrewsbury tomorrow and pick up the points that they want.

The Reds are yet to get a league point on the board from their opening two games but Stephenson says they are keen to make up for missing a late penalty at Cheltenham on Saturday.

“We’re a bit disappointed but the lads have got to keep the morale up and stay positive,” he explained. “That’s what we’ve done after missing that late penalty on Saturday. You can’t affect the past but you can affect the future and we’re looking forwards and not backwards.

“I think when you’ve had a disappointment like we had on Saturday you don’t want to wait a week. I didn’t as a player and I’m sure the lads are the same. They want to get out there and get it out of their system and get a few points on the board.

“We’ll try to be well organised and difficult to beat. We’re away from home after all and when we make chances we need to take them.

“We hope that one we get the first win then the confidence will breed in the lads and kick us on to a run like we had last season.

“We’d say that there wasn’t a lot of difference between us and a well fancied sides in the division in Southend, without us creating enough chances for ourselves. Leeds away was a tale of two halves and we changed the formation at half time and then tried that formation at Cheltenham.

“It worked in parts but there are other bits we need to work on. We finished strongly again and could have got a draw.

“To sum up we could’ve had a couple of draws and two points on the board but we haven’t. We’ve been on the wrong side of a couple of penalties basically.

“A lot of teams are having a really good go this season and we’re playing a lot of those early in the season. We knew that it was going to be a tough start but we’ve been pretty close in the games and a break here or there could’ve seen us take some points here and there.”