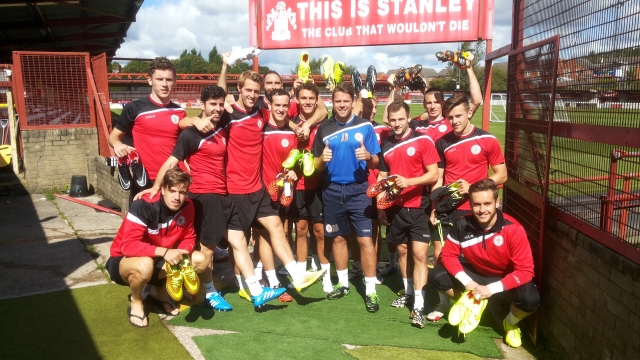 The Accrington Stanley players have received a huge boost ahead of tomorrow’s game with Luton Town thanks to the Football League’s main sponsor Sky Bet.

After the majority of the first team squad had their boots stolen following a break in at the Store First Stadium, Sky Bet have stepped in to provide the players with new footwear.

The lads received their replacement boots earlier today in time to take on the Hatters tomorrow afternoon.

“We can’t thank Sky Bet enough for helping us out,” said Stanley boss James Beattie. “The players here don’t earn lots of money and losing their boots earlier this week was a big blow to a lot of them.

“This gesture is a big lift to us and has helped us to end a difficult week on a high – now we’re out to end it with three points tomorrow.”

Stanley captain Luke Joyce was one of the players to have his boots stolen. He said the squad were delighted to have new ones sorted so quickly.

“This came out of the blue,” he said. “On behalf of all the players I’d like to say how grateful we are to Sky Bet. We can put this break in behind us now and get on with the job of winning games.”

Sky Bet have launched the Transfer Fund which gives fans who bet with Sky Bet a token for every pound they spend, putting them in with a chance of winning the £250,000 Transfer Fund for their club. For more info click HERE