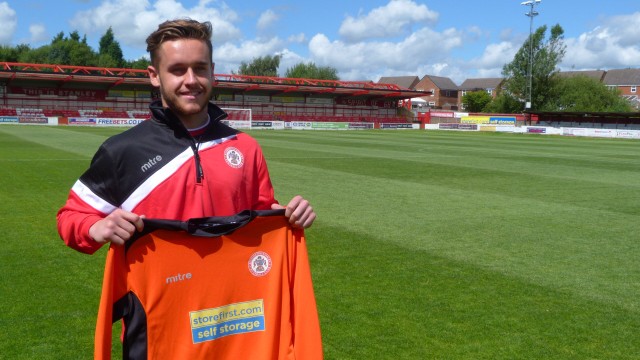 Stanley have completed the signing of goalkeeper Luke Simpson after a successful trial with the club.

The 19-year-old former Oldham youngster has signed an initial six month contract at the Store First Stadium to become James Beattie’s second signing of the summer.

He’d been training with the cliub and has been impressed by the atmosphere on and off the field.

“Everyone’s so happy here and loves being here,” he said. “That’s what I want. I’m a positive person and I like to have positive people around me and the manager is who he is and is a top manager. It’s a homely, family sort of environment.

“The way the team have been playing since I’ve been here has been great. I was on the bench for the Burnley game, which I thought they did really well in, and the Altrincham game then played for the reserves at Birmingham and against Chorley.

“Each game I’ve played in or seen they’ve been good and I can see a good start to the season hopefully and then we can kick on from there.”

“Luke’s come in and shown us that he’s a good keeper with a lot of potential,” said Beattie. “He’s impressed us in training and in games and this is a great opportunity for him.”