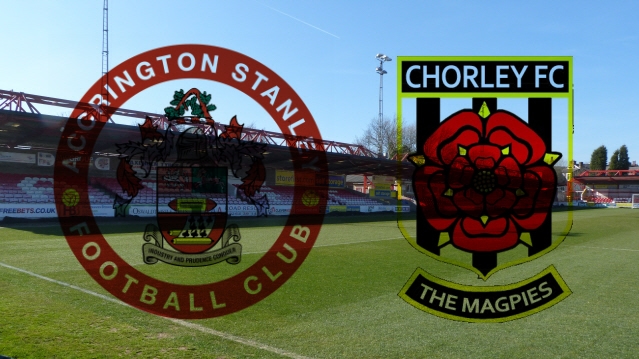 Tonight sees the final pre-season friendly for the Reds as neighbours Chorley make the short trip to the Store First Stadium.

The warm up campaign has seen James Beattie’s side only lose to Premier League new boys Burnley and with just eight days left until the League Two opener against Southend United, this is the final chance to look at personnel and assess tactics in a match situation.

The Magpies are gearing up for their debut season in the Conference North having won the Evo Stik Premier Division last season and with their season also beginning a week tomorrow with a home game against Lowestoft they could provide a test for the home team.

Two former Blackburn Rovers players are reunited in the dugouts, with Beattie facing off against Chorley boss Garry Flitcroft.

Kick off is 7:30 and admission pricesare just £5 for adults, £3 for concessions and £1 for accompanied under 12′s.

The Jack Barrett (Main) Stand and the Clayton End will be in use for the game, with Chorley fans being allocated sections A to D of the Jack Barrett Stand.

The sports bar will be open to supporters of both clubs – this is a pay at the turnstile match.