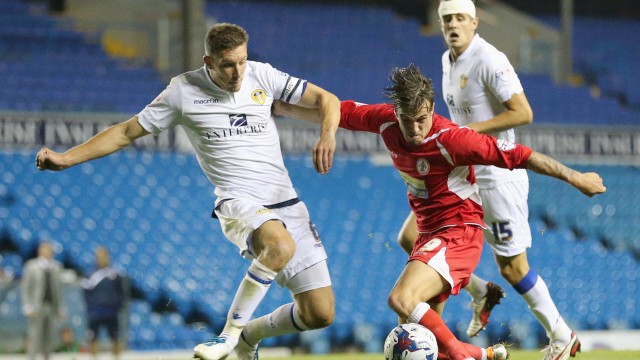 Gray: We must take positives

GOALSCORER James Gray believes Stanley can take plenty of positives out of their trip to Leeds despite the 2-1 defeat in the Capital One Cup first round.

Striker Gray got off the mark for the season with a goal on 84 minutes after Stanley had gone 2-0 down to the Championship side.

The Reds had a real go in the second half and Gray believes they can build on this.

“I think in the first half we probably sat off them a little bit and didn’t really get to grips with their three in middle of the park,” admitted the Northern Ireland international.

“At half-time we changed the formation a little bit and I think we felt more comfortable and we took the game to them.

“We won the second half 1-0 but it was disappointing to lose the game 2-1. Individual mistakes cost us and there were two great finishes by their lad (Souleymane Doukara) but we were just disappointed to go in two goals behind at half-time.

“I didn’t really have much of a sniff at goal all game and then Jordan Mustoe and Will Hatfield have done brilliantly on the left hand side and pulled it back to me and it ended up in the back of the net.

“I thought we were going to nick another one especially when they went down to ten men as they started to drop off but unfortunately it didn’t come.

“Despite some negatives in the first half, there were lot of positives to take from the game.  I think we did ourselves justice in the end, in the second half – whether it was the formation change or the words at half-time – but we showed what we can do.”

Gray admits it’s good to get off the mark for the season as he looks to get into double figures for the first time in his league career.

“I wanted to get a goal as early as I could and it was good for me to get off the mark although the result was disappointing.

“Now we have to take how we played in the second half at Leeds  into our league games. League Two is different from coming to a Championship club and I think we can take a lot of confidence out of the Leeds game.”