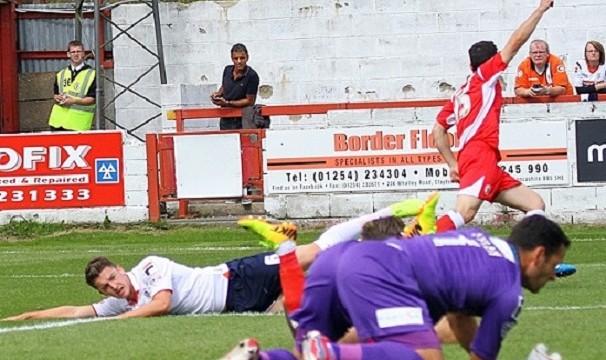 ONE OF Luke Joyce’s aims this season was to get more goals – although he hopes the next one is a bit more spectacular than his first!

The Stanley skipper got off the mark for the season with Stanley’s second in their 2-2 draw with Luton on Saturday.

Piero Mingoia’s corner was cleared out to Joyce on the edge of the area and he headed goalwards. Via a deflection and the woodwork, the ball found its way into the back of the net and he wasn’t complaining.

“I can’t lie and say I knew exactly what I was doing,” said the skipper.

“To be honest, the ball has come to the edge of the area and it’s 50/50. I have just gone up and tried to put my head on it to get it back in the box. 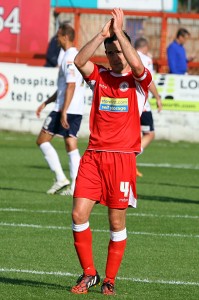 “It’s landed and the lads have come over and said it has gone in – I would have liked it to be bullet header but I am more than happy. I will claim that – I am up there with the top goalscorers for the season now!

“One of my aims at the start of the season was to contribute more goals and get forward a little bit more and hopefully I can pick up more goals.”

Stanley were frustrated to throw a two-goal lead away but Joyce believes there are plenty of positives to take from their Luton show.

“It was a great start and was great to get 2-0 up in the first 20 minutes – we did exactly what we wanted to do.

“We had a game plan and stuck to it but at 2-0 we dropped a little deep and stood off them a bit too much. To be fair they made a change and changed their shape and that got them into the game a bit more.

“It does feel like two points dropped although I think we showed resilience in the second half and we dug in and defended well.

“We also had a few chances and could have won it. With reflection, it could be a decent point and one to build on.”