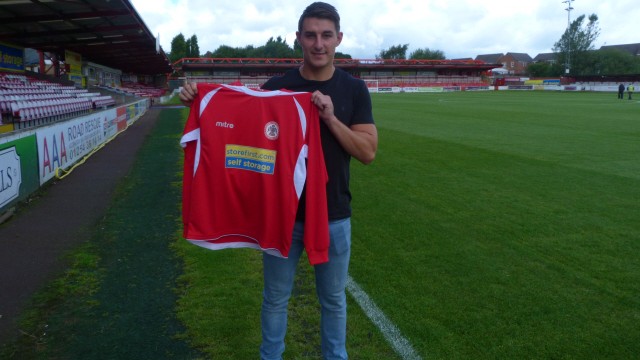 Full Back Mustoe Signs for Stanley

ACCRINGTON Stanley have completed the signing of former Wigan full back Jordan Mustoe.

The 23-year-old was a free agent following his release from the DW Stadium and has penned a short term deal at the Store First Stadium.

He played for the Reds in a pre-season game earlier in the summer and has now earned himself a contract.

“I’m thrilled to be honest,” he said. “To not have a club on the first weekend of the season hurt to be honest. The plan was always to be at a club by then and I’m just glad to be here now.

“I don’t think some players realise how tough it is out there. There’s a little bit of luck involved too and you have to perform. I’ve had a good pre-season and I’m raring to go.

“You can’t beat playing Saturday and Tuesday so hopefully I can get some games, get some points on the board and get going.

“You don’t want an easy ride otherwise people take it for granted. You want competition for places. I’ll train hard and work my socks off.”

Manager James Beattie is pleased to secure the services of the left back, who has previously spent time on loan at Barnet, Morecambe, Carlisle, Bury and Wycombe.

“He’s a very good player and played for us in the pre-season friendly at Altrincham,” said Beattie. “We were very impressed with him then and he’s come in initially on a short term contract but as our salary cap rises we’ll hopefully be able to offer him a longer deal.

“I want to create competition in the squad so that you play for your shirt in every game and every training session. Jordan’s a great addition to our squad. Michael Liddle’s done fantastically in pre-season and I thought he played quite well on Saturday but the competition has to be there.”

Jordan Mustoe will take the squad number 28 at the Store First Stadium.