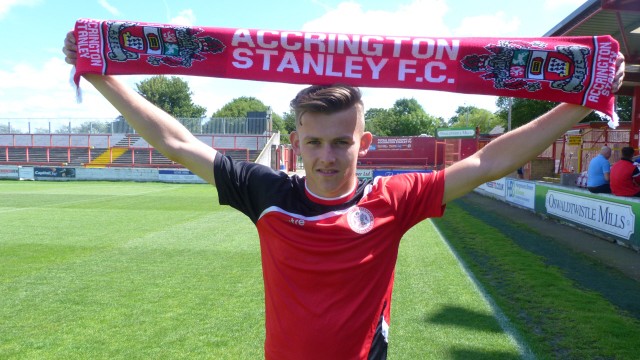 CONNOR Martin has signed a short-term deal with Accrington Stanley as he looks to break into the first team squad.

The 18-year-old midfielder was captain of Rochdale’s youth team last season and has signed up at the Store First Stadium after impressing on trial.

“I am really pleased to sign for Accrington Stanley,” said Martin. “I can’t wait for the season to start now.

“I have been here three or four weeks and they are a great set of lads who I can learn a lot off. They have helped me settle in and I have some great players to compete with.

“The gaffer has obviously played at the highest level and he is there to get advice from and the likes of Joycey, Hunty and Josh (Windass) are great players who I can learn from. 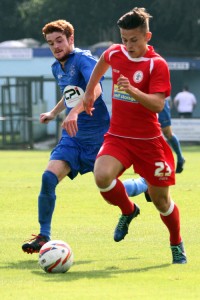 “I can play in midfield, on the wing or in the hole – wherever the gaffer wants to be to be honest!”

He admits League Two football will be a change for him – but he can’t wait to give it a go.

“The step up from youth team football to League Two is a massive leap as it is a lot quicker, especially with the pace and power, and I will have to adapt. I need to bulk up a bit but I will get there.

“I have always wanted to be a footballer and it is hard, at 18, looking for a club but Accrington have given me the chance and now I have got to work the hardest I can to make the most of it.

“It’s great to have the chance – you only have to look at what Connor Mahoney did last season. He played three or four games for Accrington and was snapped up by Blackburn Rovers and so you never know what can happen.

“My immediate aim is to try and break into the squad. I am only young but I have got to do everything I can to get in the gaffer’s eyeline in training.”

Manager James Beattie said: “This is all about Connor’s development and gives him a chance to continue impressing us in training and on a match day He’s a good prospect and this is a chance for him to continue improving.”