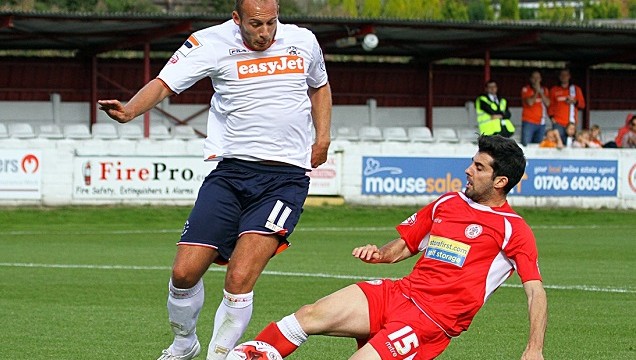 PIERO Mingoia will stick to his new blue boots – if they keep producing the goods.

The Stanley wideman was one of the players who had his footwear stolen in two separate break-ins at the Store First Stadium.

Football League sponsors Sky Bet stepped in and provided the club with 22 new pairs of boots before the clash with Luton on Saturday.

Mingoia wore his new attire and played his part in both the Stanley goals in the 2-2 draw with the Hatters.

“The boots felt really good,” said the 22-year-old. “They are a different type to what I would normally wear but they have paid off for me.

“For the first goal it was a great pass from George Bowerman and then I saw Jay (James Gray) was running into the area and thankfully he got on the end of it.

“For the second, from my corner, it was a brave header by Joycey (Luke Joyce).

“These boots are my new favourites and, if they keep producing, I will keep wearing them.”

While Mingoia was happy with his show, he was gutted the Reds couldn’t hold on for their first victory of the campaign.

“We are obviously disappointed to give away two goals and we have got to manage the game better,” added Mingoia.

“But a point is a start and now we have to build on that.”