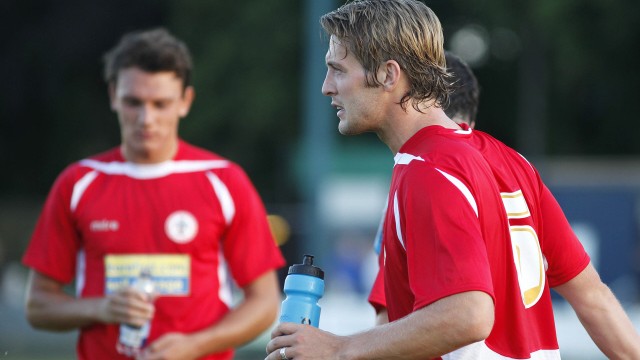 Atkinson: We can build on that

ROB Atkinson was disappointed he wasn’t the match winner on Saturday after having an injury-time header cleared off the line against Luton.

After the Reds raced into a two goal lead through James Gray and Luke Joyce, the Hatters came back to make it 2-2 and then the game could have gone either way.

In the dying minutes, a ball was floated over to the defender who jumped ahead of his marker and headed goalwards – only to see his effort hacked off the line.

“I got up early and aimed for the bottom corner and fortunately for them they had a man on the line,” said Atkinson, who was back in the team partnering Tom Aldred in the centre of defence.

“I am obviously disappointed not to get the winner but it’s a point and it is something for us to build on now.

“It is disappointing as we went 2-0 up and were looking strong. We had stressed all week about having a good start and we did that so much so they had to change their formation because we were on top.

“Then we let it slip but we now have our first point of the season and we are off the mark. We went into this game confident and we will now process the result, talk about the game and then start preparing afresh for Saturday’s game.”

Atkinson admitted it is a good battle between Tom Aldred, Dean Winnard and himself for the centre back slots.

“Last season I got injured and Tom came in and did really well. This season we have all got a clean slate and I have been given my opportunity and want to grab it with both hands.

“I want to be in team – there is good competition in that position and it means whoever is in it has to perform or else someone else will get the shirt.”