Boss Not Worrying About Leeds

James Beattie isn’t concerning himself with the strength of the Leeds United team for tonight’s Capital One Cup tie and is concentrating on his own players instead.

The Reds head to Elland Road for the first round of the competition with the weight of expectation firmly on the Championship side following a change of ownership and manager.

“There’s a lot of stuff going on at Leeds off the pitch so they’ve got to deal with that but you’d expect the players at the club to be professional and to approach every game trying to improve,” said Beattie.

“We don’t know what team Leeds are going to play. We just have to prepare. If we prepare properly, which I know we will do, then it doesn’t really matter what Leeds do or what any opponent does.

“We know what we’re going to go there and try and do and we’ll get the team sheet an hour before kick off the same as anyone else and we’ll have a look at that, see what names are on it and what formation they’ll play and get out on the pitch and face them.”

Both teams lost their opening league game at the weekend with United losing 2-0 at Millwall and Stanley beaten at home by Southend.

The manager feels this is the perfect opportunity for his players to bounce back.

“Of course we’re disappointed to have lost the first game but there are plenty of positives to take and this is a great opportunity for us to go to Elland Road, a magnificent stadium, and the lads can play their football and try to put a wrong right,” he explained.

“We’ve been here before. It’s a chance for us to go there and enjoy it. We’ll enjoy it much more if we go there and put in a good performance. The lads are determined and there’s a spirit in the camp to do well this season. We’re well structured and disciplined and we’re going there to give Leeds a good game.” 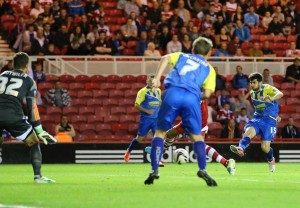 Piero Mingoia sent the Reds through at the Riverside KIPAX

This time last year the Reds headed to Middlesbrough and despite being given no chance by the pundits or the bookies won 2-1 to knock the Championship team out. Despite that they remain outsiders for this tie and Beattie has no problem with that fact.

“I guess we’re double underdogs!” he laughed. “The lads love it. Everybody writes us off which suits the lads and the club. We’ve been written off forever and a day and we use that to our advantage.

“At the end of the day it’s eleven against eleven. If you win your battles you win the game and it doesn’t matter what division you come from.”