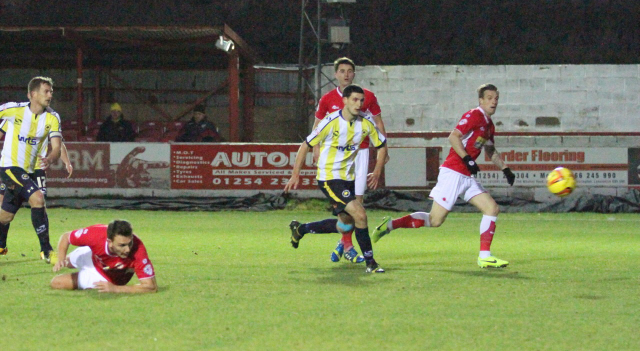 Stanley winger Kal Naismith believes pre-season is going well as the Reds step up their preparations for the new campaign.

The Scot scored twice in Tuesday night’s first friendly at New Mills as James Beattie’s men ran out 5-2 winners – but was keen to emphasise the importance of putting in the hard work.

“Regardless of the goals it was good to play,” he explained. “We haven’t played for over two months so just playing eleven v eleven against another team is good. It’s good to be back.

“We always look forward to playing. You’d rather get your fitness in from playing rather than just running but we all know the aim – you have to come back and get fit. We’ve had a lot of time off and a good summer and we have to get fit somehow and you’ll enjoy the benefits in the end when you feel fit and strong and sharp.

“You can get a bit annoyed with yourself. I did things in that game that I didn’t necessarily like but as it’s pre-season you have to put it out of your head and concentrate on the fitness aspect. Of course you’d like to have a brilliant game and your touch be there but some of the boys might be a bit rusty and it’s just about getting that first game of pre-season.

“I did part of pre-season here last season and then part back at Rangers. Now I’ve got a place where I am and I know that I’m going to be I can just get my head down and work. I know the boys now so I’m feeling a lot more comfortable this year.”