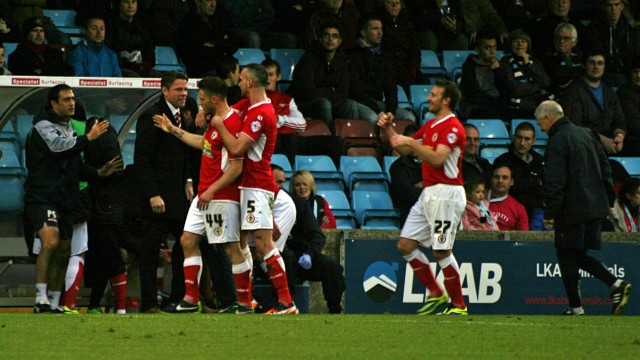 George Bowerman is determined to prove everyone that has written him off wrong after penning a new 12 month contract with Stanley.

The 22-year-old initially moved to the Store First Stadium in October after a spell out of the game following his release by Walsall.

Now the striker is looking to make up for lost time with the Reds.

“There are always doubters about your career and it’s up to me to go and prove them wrong,” he explained. “The gaffer’s given me a chance and I want to show him and the fans at Accrington that I can do the job.

“You don’t realise until you are out of the game how hard it is to get back in. There are that many people in football that want to be in your position that you have to grab an opportunity with both hands. I’ve learned that the hard way. I’m trying to get my career back on track now.”

Bowerman scored three goals in his first season at Stanley but found himself on the fringes at the end of the campaign.

He’s not worried about the past and is looking forward to a successful future with James Beattie’s team.

“Towards the end of the season we looked a good team and fingers crossed we can go better this season,” he explained. “If we start off well who knows? I feel last season we were one of the best sides in the league after Christmas.

“When the team’s playing well you can’t really do much. You just have to sit there and support the team. This season my aim is to be straight in from the beginning. I’m doing pre-season so I can’t see any reason why I shouldn’t be able to do that.”