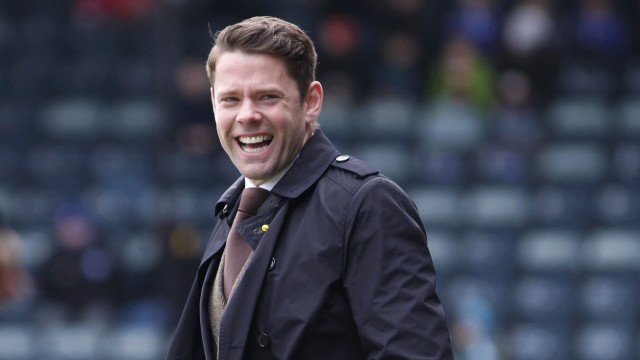 The Stanley manager James Beattie will take a stroll down memory lane this evening as his side take on the team he supported as a child, Blackburn Rovers.

The former England striker was a Rovers supporter before he came through the youth ranks at Ewood Park and now gets a chance to manage against them at the Store First Stadium.

“Everyone’s looking forward to Blackburn coming and so am I, being a Blackburn lad and having had my first season ticket there when I was seven,” he said. “It’s a surreal situation for me to be managing Accrington Stanley and having Blackburn Rovers come down for a pre-season game!

“Gary Bowyer did a great job towards the end of last season and nearly pushed them into the play-offs. As I say, it’s always been a club dear to my heart and I remember my dad took me for the first time when I was seven. We sat in the top tier of the old Riverside and I remember going to that game. It was terracing below us and I put a can of Vimto on the top and knocked it off onto this guy’s shoulder. He wasn’t too impressed! That’s my lasting memory of my first Blackburn Rovers game.”

Both clubs are hoping for  big attendance this evening as they continue their preparations for the new Football League season and Beattie believes a good turnout can make a big difference to the Reds.

“This is a massive game on all fronts really,” he explained. “The main thing is to get a lot of fitness work for the players out of the game and we know that they’ll be  tough opposition but the financial side of it is huge. Hopefully we can generate some from the fans coming down; it’s a local derby and hopefully they’ll want to come down to watch their team. Hopefully there will be a few on and it’ll be a good night all round.”

Beattie still has a number of players training with the club hoping to win a contract and some could feature in this evening’s game. The manager is acutely aware that the time to make big decisions is looming though.

“I suppose the longer they stay the more chance they have of getting a deal but money’s tight and I’ve got a budget to stick to,” he added. “The lads we already have are of a standard and they need to come in and impress. There’s a bit of pressure on them, which some people find a hindrance and others use to their advantage, and whatever the lads do they’ll need to make the team and the squad better.

“If they don’t do that then we’ll need to be honest. As long as you’re transparent from the word go and let people know what the situation is then there’s no comebacks. I said last year that telling young lads they aren’t what we’re looking for is the worst part of the job. It’s got to be done though. I have the welfare of my players and the club to look after and that’s first and foremost in my thoughts.”