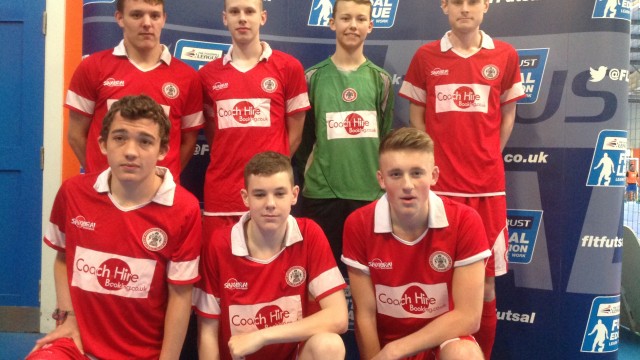 Accrington Stanley’s Futsal B squad came home proud after a fantastic effort at the League 2 National Finals on Sunday, narrowly missing out on a place in the Quarter Finals.

The competition held at the National Futsal Arena in Birmingham, was Stanley’s first appearance at Nationals after their respectable 3rd place finish in the Football League Trust’s North West Division 2, with the Reds only into their second year of running the programme.

The team was made up of our first year scholars, a remarkable achievement compared to others teams who are into third, fourth and fifth years of the programme.

Needing to finish in the top two of the group to qualify for the Quarter Finals, the Reds put themselves in a wonderful position by beating fancied Midlands side Wolves 3-1, despite going a goal down.

Leaving Stanley with their fate very much in their own hands, a win against Cardiff City would have sealed qualification. Despite pulling a goal back at 2-0 down, the Reds could not find a further two goals and a high attacking play resulted in a Cardiff break and third goal, meaning Accrington Stanley missed out on the Quarter Finals by two points.

Futsal Coach & Sports Development Officer Chris Mullen commented “the lads are absolutely gutted heading home so early. They are a confident bunch and wanted to go as far as possible in the competition. Looking back, with the chances we had in both the Scunthorpe & Plymouth games, we wonder how we haven’t won those games, but that is something we can’t change. I cannot fault the boys’ effort and determination on the day and throughout the season to get to this point from day one. For us to be in contention for the quarter finals going into the last game, for a club like ourselves, and with the boys only being first year scholars, it only adds to the proud feeling both myself and our tutor Allan Phillipson have for each and every one of them. We’ll just have to go one better next year!”

Everyone at the Trust would like to say a massive congratulations to the B squad and good luck to the scholars playing in both the C & D teams in the next few weeks!