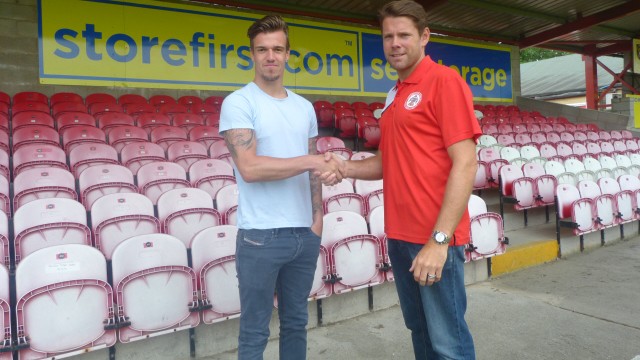 The Northern Ireland under 21 international, who turns 22 next week, scored eight goals in 23 starts for the club in 2013/14.

“After scoring three in the last two games I can’t wait to get going again,” he said. ”I didn’t really want the season to end but obviously it did and I’m just buzzing to have signed again and hopefully get some more goals when the season starts again.

“It was never in any doubt that I would stay. We spoke before the season ended and it was put in stone that they would offer me something here. It was just about terms after that. I think I was always going to stay here.

“I came on trial with about a hundred people and now I’m going into my third season here. It’s been a rollercoaster journey for me.

“It’s a huge compliment that the manager wants me to stay. He’s one of the big reasons why I’ve stayed at the club. Hopefully I can keep working closely with him. The improvements in my performances at the end of last season were mainly down to him so hopefully I can repay him again next season.”

Gray is the first of a number of players offered new deals over the summer that has signed on the dotted line and manager James Beattie is delighted to have him back on board.

“James had a great end to the season and there were a lot of people approaching me about him and talking about him in a good light which we expect because he’s a great player, a very nice young man and very well mannered,” said Beattie.

“I think he’s improved on the pitch and I think he loves working with me on a one to one basis. I’ll try to share as many things as I can with him as I do with all the players but I think that James takes a special interest in getting one on one tuition from me and I’m more than happy with that.

“James made the step up to the full Northern Ireland squad this summer though he didn’t feature and it must have been a great experience for him. I think a common goal this season will be to try to establish him in that senior squad. I’d see that as a success for myself but it’s up to James. He’s a willing listener and desperate to learn and we’re delighted to have his services again.”