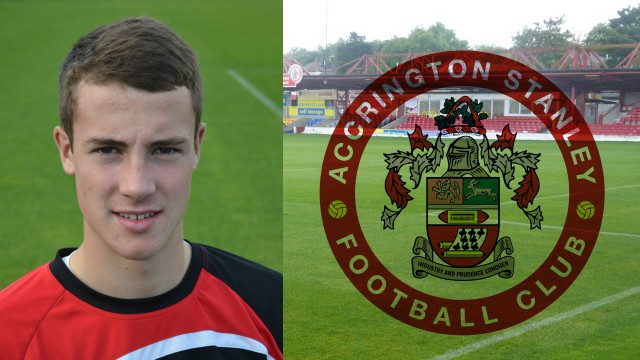 Stanley youngster Liam Goulding is filled with confidence for the future by young players getting a chance to play at the Store First Stadium.

The centre back is one of three youth team products handed their first professional deals this summer and will put pen to paper on his new deal next month.

And the former youth team captain is hoping to be the latest player to make the step up to first team football at an early stage.

“They don’t always have the biggest squad or the most money here so young players get a chance,” he explained. “When my chance comes, if it comes, then I’ll make sure that I take it.

“It’s good to see that young lads get their chance in the first team and it gives you a lot of confidence that you will get the chance and be able to step up and take on the challenge of playing men’s football. Hopefully I can do that.

“The main difference is the tempo. It’s just a lot faster and there are bigger, more physical players you come up against. I played in training against Kayode Odejayi a few times!

“I should have a lot more growing left in me so we’ll just have to see how I develop. I’m looking forward to mixing it with that kind of player regularly.”

Goulding led the Stanley under 18’s into the last 16 of the FA Youth Cup before they were beaten by Reading in February and thinks that a professional contract offer is the perfect way to top off an excellent season.

“I was thrilled when I was told,” he said. “This is all I’ve ever wanted to do since I was a kid and now it’s happened. It’s been a good two years, I’ve done well with the youth team and now it’s just about pushing on and trying to get into and become a regular in the first team.

“I think the Youth Cup run gave me some important experience, playing against some good players and good teams so it’ll be very valuable in my progression as a player.

“It’ll be a good summer, I’ll get a bit of rest and then get back to it, get my head down, come back for pre-season sharp and hopefully get my chance and show what I can do.”