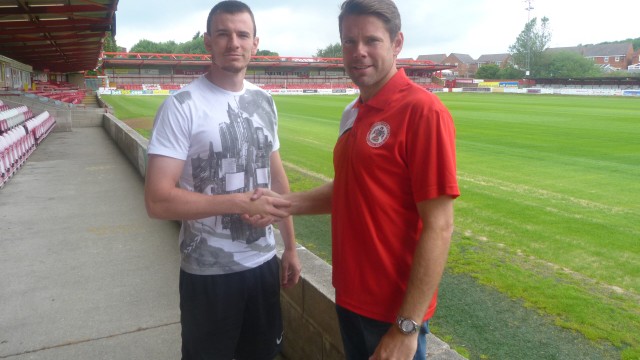 Dean Winnard will stay at Accrington Stanley for another two years after signing a new contract at the Store First Stadium.

The centre back, who joined the club in summer 2009, has put pen to paper on a two year deal.

The agreement makes the 24-year-old one of the club’s longest serving players and he’s happy to be staying.

“I can’t wait to get started,” he said. “It seems like I’ve been off forever now and I can’t wait to return. Any deal to be staying in the Football League is a great deal. There are so many great players out there who can’t even get into the league so it’s an honour to still be playing in it.

“It’s been a long road for me at the club with some ups and downs and some great experiences that you can only get at this club! That can only be a good thing.”

Manager James Beattie has now signed up four members of last season’s squad to new contracts and believes that Winard is a fine addition.

“We’re thrilled that Dean’s extended his contract,” said Beattie. “He was a pivotal member of our squad last year and his form throughout the season was tremendous. I’m delighted that he’s signed up for two years.

“We discussed it and it’s something he wanted to do, being a new dad, to get that extra bit of stability into his life. If he can kick on again this year he can be excellent. He’s already one of the most consistent players we’ve got and deserves his new deal.

“He couldn’t wait to sign which was music to my years. He said he wouldn’t want to sign anywhere else and we’re so pleased to keep him on board.”

The official website will have an interview with Dean Winnard online tomorrow.