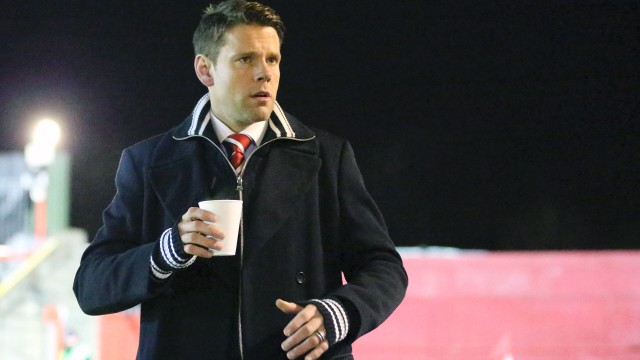 Stanley manager James Beattie has already had a busy summer – and anticipates things getting more hectic as the new season gets closer.

Beattie has signed up three of his out of contract players for 14/15 with more expected to follow suit in the coming weeks.

But although he’s told his players to take it easy during the close season, Beattie’s time has been at a premium.

“As soon as the season finished the phone started going really,” he told the official website. “This is probably the busiest time for me. I wanted all the players to go away and think about what had happened in the whole season, including the start, and try to rectify that and get it right mentally in terms of what we’re trying to do this season.

“We don’t want a repeat of the start of last season but we want more of the same of the middle and towards the end of the season. I wanted them to get away from football, both physically and mentally, for a while and that’s what they’ve done.

“I know they all look after themselves; that’s the way that footballers are these days. They’ll be fit when they come in and we’ll be match ready by the time the first whistle blows at home to Southend on 9th August.”

With more members of last season’s squad expected to commit their futures to the club soon attention is also on bringing new faces to the Store First Stadium but with hundreds of players released this summer the manager believes that patience is key.

“There are a hell of a lot of players out of work at the moment,” he explained. “Probably a lot of their expectations are way above where they actually are in the market at this present time. Their agents are probably telling them that they’re even higher in that market!

“We’re a club that’s realistic. We have to be where figures are concerned but we’re also realistic because Paul Stephenson and I know the game inside and out. We’re not here to be fooled or for the wool to be pulled over our eyes. I think come later on in pre-season when players haven’t got their signature on a contract then their expectations will come down a little bit. They’ll start to just see the opportunity to play football as the most important thing.

“We’re always open to taking people in trial or realistic offers from players to come in. This is a great club to come to and showcase your skills. Whether it’s long term or you just want to get yourself back on the ladder and in the shop window, you can do it. I’m not saying that in a derogatory way to the club, that’s a fact, that’s life and that’s the world we’re living in.

“If I can get some better quality players in for six months who help us then I’m sure none of the fans or the Chairman will have too many words to say about that. If it helps the players kick on in their careers then great. I think that’s much better than just sitting at home and expecting something that’s not going to come.”

The official website will have more from this interview with manager James Beattie over the coming days.