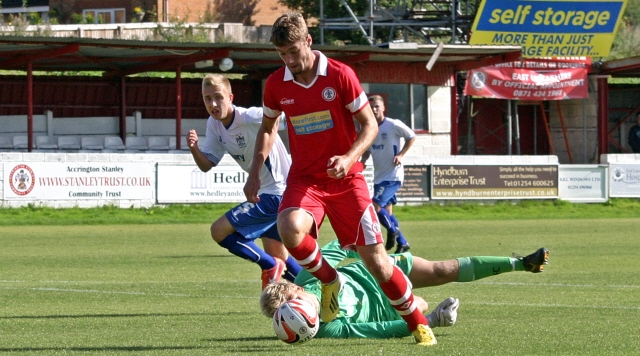 Stanley youngster James Jenkins believes he’s living the dream after being offered his first professional contract with the club.

The striker will sign up on 1st July and take his place in James Beattie’s squad – and can’t hide his excitement.

“It’s every kid’s dream isn’t it, to be a professional footballer?” he explained. “Accomplishing that and achieving it is something I’ve always wanted to do since I was really young.

“There are some experienced players here and obviously the gaffer himself was a great striker and I’d like to learn a lot from him. I think it’s going to really test me playing against the likes of Tom Aldred and Dean Winnard in training too. I just can’t wait to get started. It’ll be really good.”

The 18-year-old was handed a first team squad number for 2013/14 and was named as an unused sub in a number of games. His emergence coincided with that of teenage winger Connor Mahoney, whose success in the first team led to a big move to Blackburn Rovers. Jenkins is inspired by his former team-mate.

“Connor is a special talent. I spoke to him on the phone quite recently and he congratulated me on getting my pro contract. I was really made up at the time to be in and around the first team at the time with him. I was maybe a bit gutted that I didn’t come on but these things happen and hopefully I can make an impression now.

“Connor made his debut and really set it alight didn’t he? Look where he is now! I’d love to do the same to be honest.”

Jenkins is one of three players who will be new professionals for 2014/15 and thinks that having fellow youngsters Luke Greaves and Liam Goulding alongside him for pre-season will help.

“Me, Liam and Luke are quite close and with the two of them being centre backs we have a bit of competition when we’re playing against each other,” he said. “I’m happy they both got contracts as well and they deserve it because they are really good players.

“The Academy is turning out real talent now. There are people like Max Hazeldine and other even younger lads coming through looking at maybe next year or the year after (to break through). It’s really good to see and I’m delighted to have been party of it. I’m proud to have come through at Accrington Stanley and to be able to say that we got to the last 16 of the Youth Cup which shows how well we played.”

The immediate target for the young frontman is to return in July and try to make as much of an impression in pre-season as possible. Beyond that, who knows?

“It’s a really good standard of football,” he concluded. “Everything’s quicker, you have to think quicker and next season will be a real challenge to see if I can step up.

“I’d love to get myself in and around the first team, maybe on the bench and get that chance to come off and make my debut. I just have to try to take things in my stride and see how it goes.”