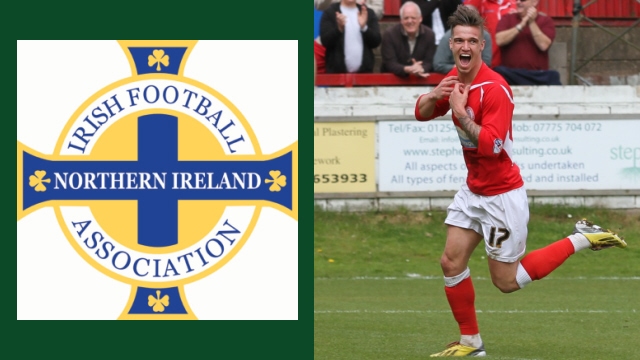 Gray Gets Call Up!

The 21-year-old has been drafted into the squad for the trip to South America which will see Michael O’Neill’s side play against Uruguay on Friday 30th May in Montevideo and against Chile in Valparaiso on Wednesday 4th June.

Gray admits it came as a shock to him to get the call:

“It was funny actually – they rang me earlier and woke me up!” he explained. “It was someone from the IFA and they asked me about my availability on the dates they were travelling and didn’t really say any more than that. Then my under 21’s manager Stevie Robinson rang and asked me how I was doing. Nobody gave much away and then they rang me again at 2 o clock and told me that Michael O’Neill wants to bring me into the full national squad.

“I couldn’t really believe it. To be honest I thought it was a wind up! I’m just absolutely made up to be in the squad and travel. I’m speechless to be honest.”

Gray has been a regular in the Northern Ireland Under 21’s in his time at the Store First Stadium and is now delighted to be given the chance to make the next step.

“The squad got announced and then some people pulled out and I’ve been drafted in,” he continued. “It’s always an aim to get into the senior national squad and I’ve been doing well for the under 21’s and scored a couple of goals in the Euro qualifiers but I didn’t really believe I’d get a call up this quickly. You hope that you can but you can never expect it.

“I think my form for Stanley has played a big part. I featured more regularly towards the back end of the season and got three goals in the last two games so I think that was a major part, getting into a bit of scoring form and getting rewarded.”

There’s little time to prepare for the former Middlesbrough trainee, who will soon be joining up with his international team mates but he’s been busy taking calls rather than preparing as he follows in the footsteps of his dad, Northern Ireland international Phil Gray.

“I’ve had to charge my phone twice! People have been phoning to congratulate me and my family have been calling and texting and they are proud of the achievement.”

Attention may well now turn to the southern hemisphere and the chance to impress for his country but Gray is grateful to those closer to home as he gets ready to go on his first trip.

“Stanley have given me a platform to show what I can do. I love the club and I have to say thanks to everyone I’ve worked with so far at the club. Everyone’s helped me get to this call up and I can’t say enough about how much of a difference it’s made. Hopefully I can carry on doing well in the future.”

Everyone at Accrington Stanley is proud to have one of our players recognised in this way and wishes James the best of luck!