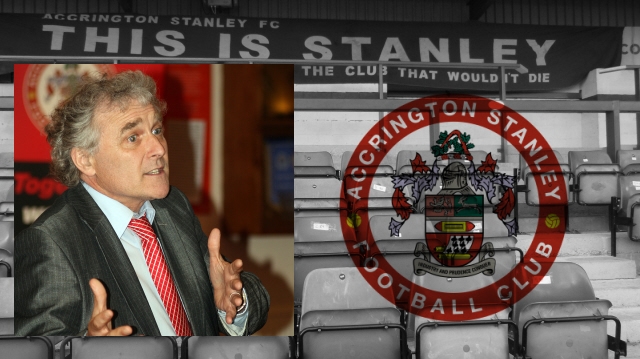 “The season may be over but things never stop at the club and I know James is already looking at potential new signings for next season.

“From a personal angle I will be particularly focusing on the need to improve the stadium to make the spectator experience even more rewarding and have already received pledges of support from potential investors which may well culminate in turning this from a dream into a reality.

“A lot is made of us having the lowest attendances in the Football League. To some extent things are what they are but with a team playing decent football and winning games and with slightly better surroundings then I think it is possible to average over 2,000.

“In the next few weeks we will be re-vamping the club lottery and would ask every Red whether they live in Hyndburn or are based further afield to buy a weekly draw ticket as it provides good revenue for the club and there are great prizes to be had.

“Please may I thank each and every supporter that has already purchased an early bird season ticket. Over 400 were sold in the April early bird period alone.“Now that we are once again guaranteed League Two football (and also we have many of our star players already signed up for another season thus promising an exciting 2014-15 season) I would urge those who have still not bought their season ticket to take advantage of the May Early Bird offer which while slightly more expensive than the April Early Bird is still great value for money. If you leave buying your season ticket to June it will go up a little again.

“We fully appreciate the tough financial times and the pressures that most people are under and so we’re trying to reward loyalty as much as we can and bring through the next generation of supporters. For this reason under 12’s season tickets are just £20, meaning that an adult can bring their child to every League Two game next season for just £245 if they buy this month.

“We’re also acutely aware of how hard it is to find such large sums of money in one go, so we’re offering the option to pay half now and half before the season begins in August. I’ve been touched by stories of ordinary supporters insisting on paying full price or in one go but as a club we want as many people as possible to be able to afford to come and join us week in and week out.

“Walk-on prices have still to be announced but they will be quite a lot higher than this season. Quite frankly this season we have been too cheap which has impacted the club financially. When I see what our supporters have been charged by other clubs on our away travels this has really brought it home to me.

“There is no reason why a regular Stanley attendee does not have a great value season ticket and this year we are pushing for 1,000.

“Those Stanley supporters who come to perhaps no more than ten games a season (say for example those for whom Stanley is a 2nd club and who only come when the Clarets or Rovers are away) will still be looked after with our book of flexi-tickets the prices of which to be announced later.

“I wish every one of our fans a very happy and sunny summer and look forward to seeing you all when football resumes again. We have a couple of cracking friendlies already lined up.”