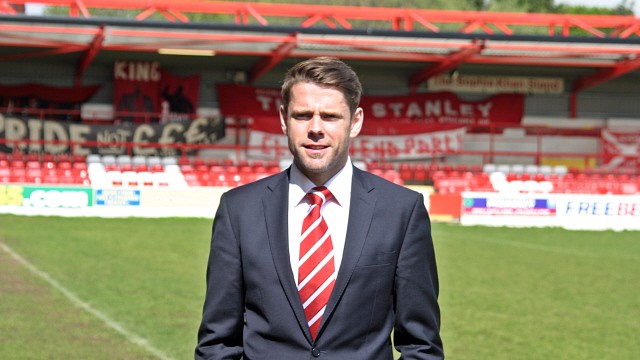 James Beattie expects his preparations for next season to move up a gear once he’s spoken to Chairman Peter Marsden about finances.

The Reds signed off the 2013/14 campaign with a win over AFC Wimbledon to secure a 15th placed finish in League Two and now attention turns to the future.

“I think first and foremost I need to sit down with the Chairman and get the numbers that I’m allowed to play with,” said the manager. “He wanted to do that after the final game but that was tricky with the presentations and the Chairman entertaining people so we’re going to take a bit of time out and meet in London in the next couple of weeks.

“I can get my budget numbers and we can start planning and putting things into concrete from there. He was very positive when I spoke to him before the last game about a lot of things that we’ve discussed over the past few months.

A dozen players are out of contract this summer at the Store First Stadium with their futures currently being discussed. 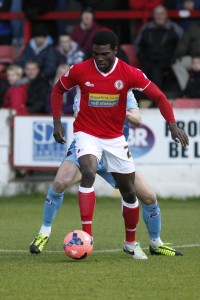 One man definitely leaving the club is striker Kayode Odejayi, whose loan spell from Rotherham has now expired.

Beattie isn’t ruling out a return for the big front man though:

“Kayode’s contracted to Rotherham until the end of June. He’s obviously one of the players we’ve discussed. He’s probably on too much money for us to pay him what he’s on now but I’m sure there will be a conversation between me and him.

“I’ve already spoken to James Gray and told him what my intentions are for him, as is the case with other members of the squad.”

In the coming weeks the pre-season programme of warm-up games will be finalised, new contracts signed and new faces added to the squad but the manager doesn’t want to set any targets for next season just yet.

“It depends on which players we can keep, whether bigger teams come enquiring and depends on how much money we’ve got to spend this summer,” he explained. “Until I meet the Chairman and he tells me what sort of numbers I’m dealing with I’m not sure.

“The lads have done a great job. It’s widely known that we’ve got the worst budget in the Football League but if we can create something similar to what we’ve had this year and maybe get a cash injection from somewhere then who knows what’s possible.”