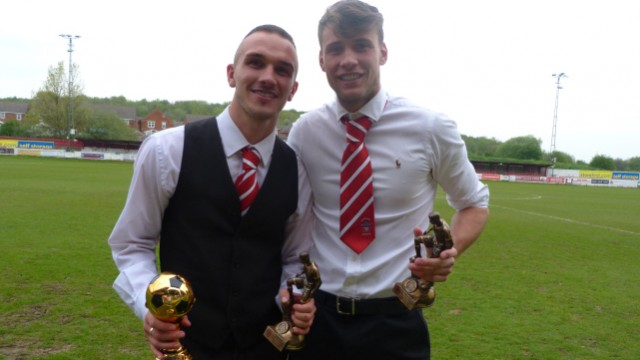 Stanley’s Player of the Season Tom Aldred feels honoured to be recognised by the club’s supporters – and to have helped the Reds stay in the Football League for another season.

“I feel so fortunate to have played every minute of this season,” said the 23-year-old. “Being a defender, I’ve been lucky not to get a suspension or an injury or whatever and I’m blessed that I’ve been able to come through it.

“It’s been a great season, personally and as a team and I’m absolutely buzzing to win both awards.”

Stanley finished the season in 15th place, a far cry from a 12 match winless run at the start of the season that saw them sit bottom of the pile.

“I honestly think that the draw away to Wimbledon was a turning point,” explained Aldred. “I did an interview after that game and I remember saying that it would be a turning point and I feel that it was. We were just a different team and a different animal after that and I think the 50 or 60 minutes we played with ten men was big for us. Since then we haven’t looked back.

“We’ve got our rewards from our hard work. At the start of the season we were coming in and thinking that we weren’t getting those rewards and it was unfortunate but we turned that around and I think we deserved to finish strongly.” 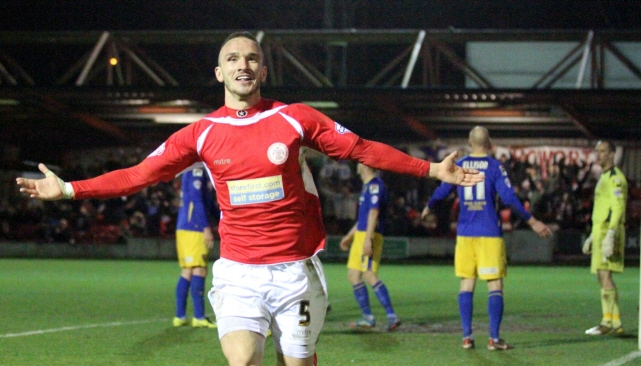 Aldred’s reputation has soared thanks to his performances at the Store First Stadium, with the former Carlisle man picking up a League Two Player of the Month nomination in March.

“I came here after having a few moves here and there as a young lad and delighted to be back home and looking to stabilise my career,” he continued. “I’ve done that, I think Saturday was my 62nd or 63rd appearance and I feel like I’ve been getting better.

“This is a great club and it’s been great for me this season.

“I think there’s probably 40 people in there, players and staff, who have played their part in us staying up. There are some clubs who probably have ten players that have barely kicked a ball but you look in our dressing room and lads have all played their part.

“If you look at young Andrew Dawber he’s a prime example; he probably hasn’t played as much as he’d wanted but he played in three massive games over Christmas and did a superb job.”

Aldred shared the individual limelight with Marcus Bettinelli at the weekend, with the Fulham loan goalkeeper picking up the Young Player of the Year prize. Aldred thinks he’s deserving of the accolade:

“Marcus is just brilliant. He came in for the Cardiff game and I just remember thinking that this was a special player. He’s gone onto get better and better and with our back four and him behind we’ve looked solid. It’s been a pleasure to play alongside him.”