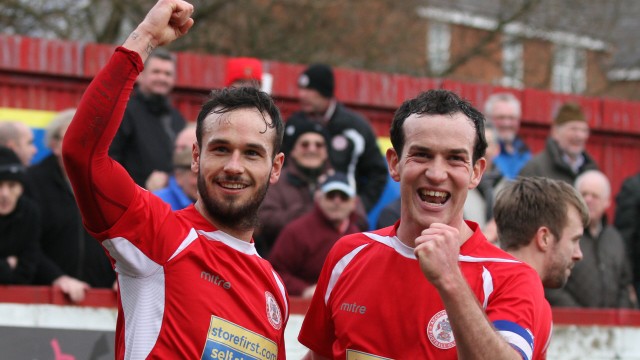 Skipper Thanks Fans For Commitment

There’s just one week left for supporters to take advantage of the April early bird season ticket deadline, allowing you to guarantee your place for the 2014/15 season at the Store First Stadium at the cheapest possible price.

Close to 200 early bird season tickets have already been sold and the Stanley captain Luke Joyce thinks that is a huge show of commitment to the club.

“It shows real loyalty for supporters to have already signed up for next year’s season tickets,” he said. “We know that the fans that come every week are the same people week in and week out, the die hards, and it’s great to think that those people will be here again next season.

“I’m sure people have seen the pictures from the York game of the fans with the t-shirts on spelling ACCRINGTON STANLEY – that’s the sort of support we get. We see things like that and it puts smiles on our faces – if supporters are making the effort to show their commitment by spending their hard earned money on their season ticket and travelling away and going to lengths like that then we’ll be giving our all to get results and get three points.

“We want to say thanks by getting good results and making sure those fans enjoy the football and have a great day out every time they come. We want to give everyone reasons to smile and be happy and be proud to come and watch Accrington Stanley.

“We’re all planning for the future. I’m sure the gaffer and Stevo are sitting down talking about players and budgets for next season. If we can carry on the kind of form we’ve shown from October until now and retain as many of the players as we can then there’s no reason why we can’t have a really good go next season.”

You have until next Wednesday to sign up for your season ticket at April Early Bird prices – and you only need to pay half now and the balance before the new season begins!

Click HERE to get all the season ticket information.