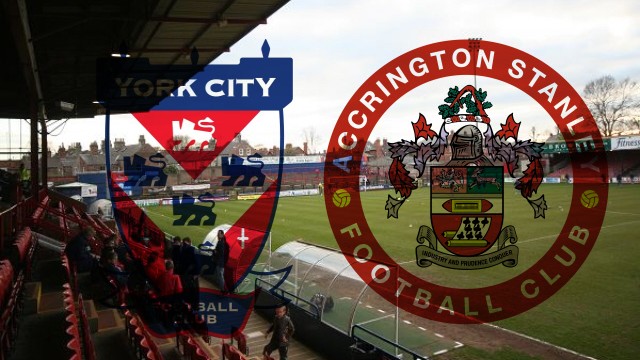 Stanley are on the road again this weekend as the Reds made the trip to face in-form York City.

York City were originally formed in 1908, before folding in 1917. The present club was re-founded in 1922 and joined the Midland League.

The club was then elected to join the football league in 1929, where they joined Division Three North. The club then became founding members of the Fourth Division in 1958 and were promoted in the league’s inaugural season.

The club were again promoted to the Third Division in the 1983/84 season, before suffering relegation back to the basement division in the 1987/88 season. The club again gained promotion from what was now known as Division Three in the 1992/93 season and stayed in Division Two for six seasons, before being relegated in the 1998/99 season.

The club were then relegated to the Conference in the 2003/04 season before gaining promotion back to League Two in the 2011/12 season, after defeating Luton Town 2-1 in the play-off final at Wembley.

In their first season back in League Two, City finished in 17th place in the table.

52 year old Worthington is currently in his fifth managerial role after joining City in March 2013. Worthington also previously had spells as manager of Blackpool, Norwich City, as caretaker manager of Leicester City and as manager of the Northern Ireland international side.

Worthington also had a successful playing career, spending the majority of his career at Sheffield Wednesday, where he made 339 appearances and scored 12 goals. He also had spells at Ballymena United, Notts County, Leeds United, Stoke City and Blackpool as well as making 66 appearances for Northern Ireland.

28 year old Penn signed for York in the January transfer window and is the current captain of the side. He has so far made 16 appearances for the club since signing from Cheltenham Town.

Penn started his career at Scunthorpe United, but left the club without making an appearance. He then signed for Kidderminster Harriers, where he made 145 appearances and scored 19 goals for the club, before signing for Burton Albion and then Cheltenham Town before signing for City.

The sides have met on 56 previous occasions, with Stanley holding the advantage with 27 victories to 17 victories for York.

There have been 12 draws.

The last two meetings, in December and April last year, both ended 1-1.

Stanley haven’t beaten the Minstermen since March 2006 when they were 4-2 winners at Bootham Crescent thanks two two goal from Paul Mullin and one each from David Brown and Ian Craney.

City have had an excellent season so far in League Two, currently sitting in seventh place in the table. So far this season they have won eight, drawn eight and lost four of their 20 home league matches.

Worthington’s men have kept clean sheets in their last seven games and have drawn their last two, against Rochdale and Burton, 0-0.

Stanley saw a four match unbeaten run ended by a 1-0 defeat to Northampton last time out.

They sit 16th in League Two, two points behind 13th placed Cheltenham and six points clear of the relegation places.

James Beattie has a full strength squad to select from after Laurence Wilson and Marcus Carver both returned to training this week.

Adam Buxton is available to play after extending his loan deal from Wigan until the end of the season.

City have played at Bootham Crescent since 1932, after having previously played at Fulfordgate. The current capacity of Bootham Crescent is 7,872 and the clubs record attendance is 28,123, which was set against Huddersfield Town in the FA Cup in 1938.

Admission info can be found by clicking the link – http://leescarter.com/2014/04/york-admission-prices/