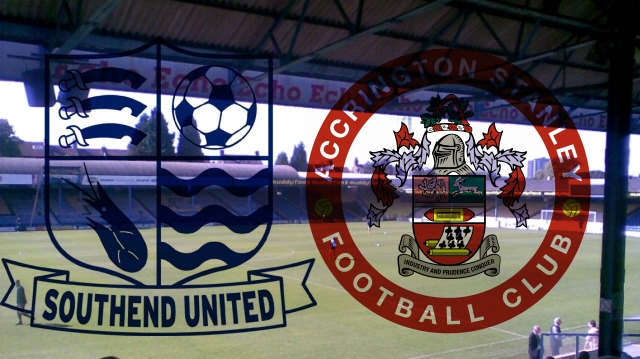 Stanley’s penultimate away trip of the season sees them make the journey to Essex to tackle promotion chasing Southend United.

The Shrimpers were formed in 1906 and originally played in the Southern League before they co-founded the new ‘Third Division’ in 1920.

Finishing third in the 1932 season and the 1950 season remained United’s highest place finish until 1991. The Shrimpers enjoyed back-to-back promotions in 1990 and 1991 which led them to the Second Division and just over a decade later found themselves back at that level after winning League One.

The following season saw the Shrimpers beat Manchester United and Leeds in the League Cup but they were relegated back to League One at the end of the campaign.

In 2010 they were relegated again, this time to League Two, and they have been there ever since but under former Hull boss Phil Brown they are now eyeing a return to the third tier.

World Cup winning England captain Sir Bobby Moore was Southend manager between 1984 and 1986. His managerial record at the club was unspectacular but he remained associated with them as a Director until his death in 1993.

Brown is currently in his fifth managerial role after succeeding Paul Sturrock as manager of the Shrimpers in 2013. Prior to being Southend manager, Brown has also had spells in charge of Preston North End, Hull City, Derby County and as caretaker manager of Bolton Wanderers.

Prior to being a manager, Brown also had a successful playing career, appearing for clubs including Hartlepool United, Halifax Town, Bolton Wanderers and Blackpool.

28 year old Hurst is having an excellent season so far for the Shrimpers, netting 11 times in the league so far this season.

Hurst started his career at Sheffield United and during his time at the club had spells on loan at clubs including Boston United, Stockport County and Chesterfield. After leaving Sheffield United, Hurst had spells at Scunthorpe United, Carlisle United, Morecambe and Walsall before joining the Shrimpers.

There have been eleven previous meetings between Stanley and the Shrimpers, with Southend boasting four victories to Stanley’s three. There have been three draws.

The last two games have ended 1-1 but Stanley were 1-0 winners on their last visit to Roots Hall, which was on the opening day of last season.

Karl Sheppard scored the only goal of that game on his debut for the Reds.

The Shrimpers have had an excellent season so far, currently sitting in 6th place in the League Two table. They have won nine, drawn seven and lost five of their home matches so far this season.

Stanley have drawn their last two games 1-1 and have only tasted defeat once in their last seven outings.

James Beattie’s side sit 17th in League Two, four points ahead of Northampton who are 23rd and three behind Newport who are 13th.

The Stanley medical staff will assess any bumps and bruises picked up against Mansfield on Friday but Beattie is likely to once again have a full strength squad to select from.

The Shrimpers currently play at Roots Hall, having moved to the ground in 1955. Previous grounds for the Shrimpers include the Kursaal and Southend Stadium. The current capacity of Roots Hall is 12,392 and the clubs record attendance is 31,090, which was set against Liverpool in the FA Cup in 1979.