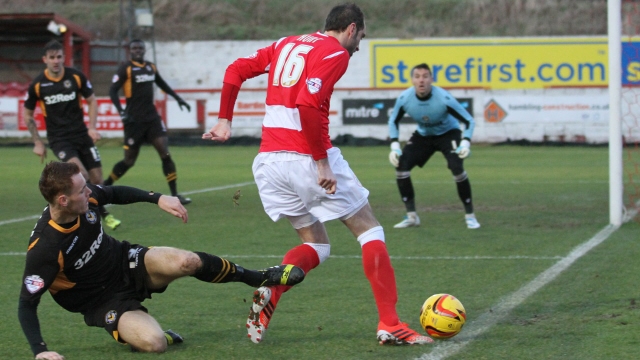 Stanley defender Nicky Hunt believes the pressure is on Northampton Town tomorrow when they visit the Store First Stadium.

The Cobblers are second bottom of League Two ahead of the game and three points behind closest rivals Wycombe, with Stanley nine points better off.

The Reds are unbeaten in their last four games and have a five match unbeaten streak at the Store First Stadium to protect but Hunt is expecting the visitors to attack.

“They’ve got to come here to win,” explained the 30-year-old. “They can carry on drawing but it doesn’t really help them in the long run if teams above them like ourselves, Wycombe and Bristol Rovers keep winning.

“They have to come here with a gameplan. I’m hoping they come here attacking because we can play our game and counter-attack them and hopefully get three points.

“If they attack they’ll leave gaps for us to exploit on the counter, with big Kay up front and Jay Gray we’ve got a lot of pace there and people like Will and Lee on the wings playing there and doing very well, getting the crosses in and hopefully we’ll get the goals to win the game.”

Six games remain in League Two and Stanley could climb as high as eleventh place with another win. Hunt doesn’t think there’s anything wrong with being ambitious at this stage.

“We want to beat the 54 points we got last season,” he said. “I think we can get to 60, that’s 11 points out of six games which is four wins basically.

“We as players believe we can do that. If you believe it as a player the next step is to go out and do it on the field.”