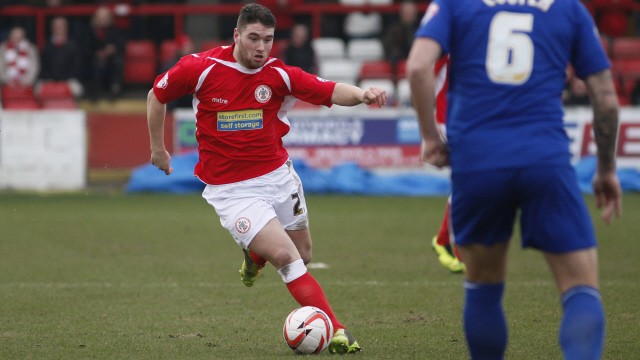 Adam Buxton has extended his loan at the Store First Stadium until the end of the season.

He has gone on to make eight Stanley appearances in that time.

“I’ve massively enjoyed my time here,” said Buxton. “I’ve had a great month and we’ve had some great results and I’m just made up now that I’ve extended until the end of the season and I can hopefully get more games under my belt and help the team kick on up the league.

“I’ve got eight games under my belt already and couldn’t ask for much more really. I’ve been involved in every game and hopefully I can keep getting games and we can kick on.

“I played right back or left back as a kid. Obviously I enjoy right back more because that’s where I’m more comfortable but if I’m needed to fill in at left back then I will do.

“We’ve had a great month and got off to a flyer beating Chesterfield who were top of the league at home in my first game. It was disappointing not to get the win in the last game but we’ve had some great results in the last month. Hopefully we can get more between now and the end of the season.

“Being involved in first team football every day is completely different to being involved with the reserves. Everyone is fighting for points, whereas reserve football isn’t really competitive, real football. I’m enjoying it more coming in and fighting for three points every week!”

Manager James Beattie is delighted that Buxton is staying:

“It’s great news,” he said. “I think he’s done extremely well since he came in and when we lost Laurence Wilson he stepped in there and has acquitted himself really well. He’s both footed, he likes to get forward and he’s a great lad so we’re really happy to have him stay.”