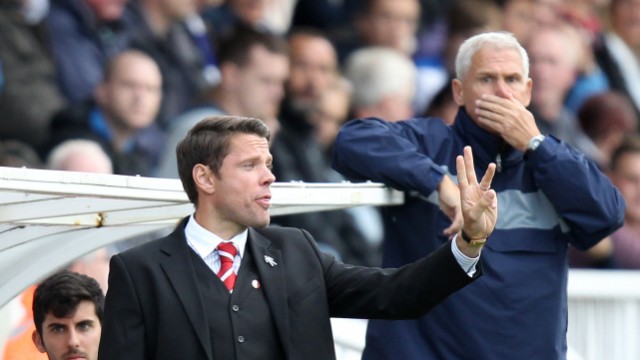 Beattie: “Job is Not Done”

Stanley manager James Beattie is urging anyone considering his side safe from relegation from League Two to have a rethink.

The Reds are 17th in League Two with a four point cushion to the relegation places ahead of tomorrow’s trip to high-flying Southend.

But Beattie insists that nobody in the camp is thinking further ahead than the next game.

“Until we are mathematically safe then I’d urge anyone who thinks that the job is done to have a rethink,” he explained. “Until it’s mathematically impossible for us to go down then nothing changes.

“We’re still coming in and working hard, from Naz the kit man to the Chairman, we have to keep working hard to keep this club in the league.

Beattie’s team have taken late points in their last two games thanks to stoppage time goals to maintain their advantage over the teams below them in the table and the manager thinks that’s exactly the kind of mental strength they’ll need to bring all three points back from Roots Hall.

“The late goals show what great character the boys have got,” he said. “They never say die, as it says on the sign over the pitch when you walk out at the Store First Stadium. This is the club that wouldn’t die and the lads are taking that out into the games.

“When we played them at home Southend were one of the best sides we’ve played. Phil Brown’s done a great job there but I’ve got every faith that our boys can go there and get a result.

“We’ve done our due dilligence on Southend and looked at the ways we can hurt them and get at them and we’ve touched on the ways they can hurt us too.

“As far as I’m concerned everything is positive going forward because I have total faith in the players in that dressing room.”