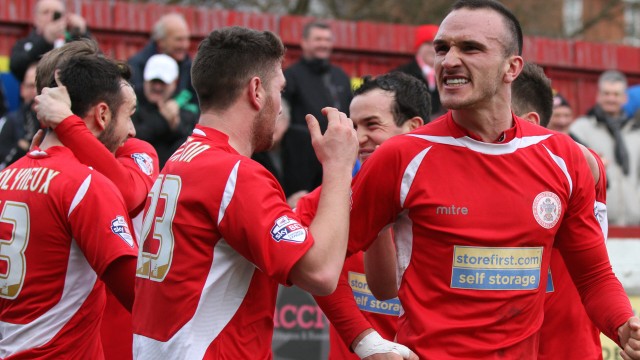 Aldred Backing Run to Go On

Stanley defender Tom Aldred is targeting last season’s points total of 54 as the League Two season begins to come to a close.

The Reds sit 15th in the table with 49 points on the board ahead of this afternoon’s crunch clash with Northampton Town at the Store First Stadium.

And Aldred thinks that James Beattie’s side, who are unbeaten in four games, can continue their good form.

“With six games to go you’d like to think that we can exceed last season’s points total,” said the 23-year-old. “If we can beat Northampton then we’ll be well clear of them but I think we still have to look to finish as high as we can and not worry too much about what is beneath us.

“You would’ve taken this situation at the start of the season but even then I felt the performances were there and it was just about getting the results. Now the results are following it’s great and we hope that can carry on right until the finish.

“I think this is as good as the team’s been since I joined the club. We look hard to beat, we have a goal threat and unfortunately in the last month we’ve scored a lot of goals in some games and not managed to score in others. 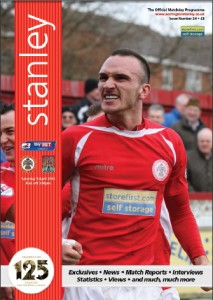 “If we’d shared those goals out then we could have been looking at 20 odd points in March!

“In all areas of the pitch we look good and even the lads that aren’t involved are strong, strong players. It all bodes well for a good finish to the season.”

Tom Aldred is the main interviewee in this afternoon’s match day programme, with Stanley’s number five discussing his Player of the Month nomination, his remarkable run of starts and his future at the Store First Stadium.

The match day programme is priced at just £3 from around the ground.