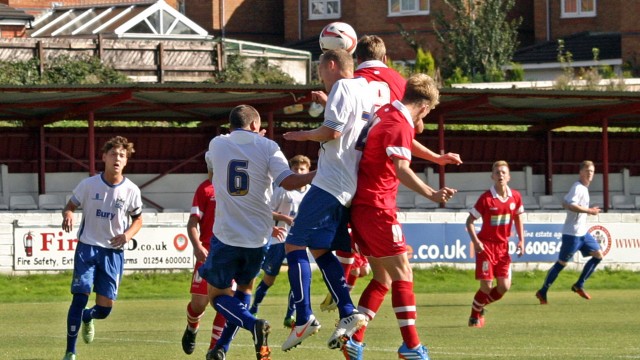 After Stanley’s previous Youth game (vs Macclesfield) was postponed, next up for the Reds is a home clash against Morecambe on Saturday (29th March).

Mid-table Stanley are in a six team cluster separated by only 5 points in the middle of the table, Preston North End in 9th are on 25pts, Macclesfield are on 20pts in 14th while Stanley, Carlisle, Fleetwood and Wigan make up the gaps in between.

The Reds come into the game against Morecambe on the back of two 0-0 draws away to Walsall and Bury and are without a win in their last four league games. The last league win came over Preston North End in December when they thumped the West Lancashire side 5-1. Since then the Reds have drawn 1-1 vs Wigan, 0-0 vs Bury and 0-0 vs Walsall, losing only once in their last nine league games.

Complimented by a historic run in the FA Youth Cup, the youth team are in line for a much improved season compared to last year where they finished bottom of the Youth Alliance table. After losing their 5th round Youth Cup tie away to Reading in February, the Reds are now able to direct their full attention towards achieving the best possible finish in the league.

Stanley’s opponents Morecambe are currently cut five points adrift at the foot of the Youth Alliance table but Stanley will know better than most not to take the Shrimps for granted after they knocked out Accrington in the first round of the Youth Alliance Cup back in October. On that day Morecambe ran out 3-2 winners but since then Stanley have levelled record with a 3-1 win away to Morecambe in the reverse of this weekend’s game.

Morecambe picked up their first win in over a month against Walsall last time out, winning 3-2 to put an end to a three game losing streak. Previous to the victory over Walsall, the Shrimps suffered a heavy 7-1 defeat away to Rochdale. This came only a week after another stinging loss, 5-2 at home to Burnley.

The game is a 2pm kick-off at QEGS playing fields, Blackburn.

Unfortunately we won’t have live, minute by minute updates but we’ll do our best to keep you updated on the score through our Youth team twitter page, @ASFCyouth.