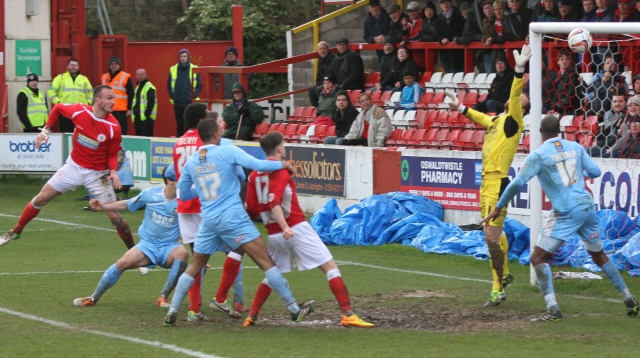 Accrington Stanley came from a goal down to draw 1-1 with play-off chasing Plymouth Argyle at the Store First Stadium.

Reuben Reid’s fierce strike in the first half looked as though it would be enough for the Pilgrims to come away with all three points from a scrappy encounter but Tom Aldred scored his second goal in as many games to rescue a point for the Reds.

There was one enforced change for James Beattie as Laurence Wilson was unable to recover from the groin injury sustained in Tuesday’s 5-1 win over Morecambe. That meant a recall to the side for Nicky Hunt, with Adam Buxton moving over to left-back.

A torrential downpour before the game left the pitch soggy and sticky which meant that both sides were unable to play their usual passing game, despite their best efforts.

Given his recent exploits, it was no surprise to see Lee Molyneux threaten early on as he hit a free-kick just past Jake Cole’s post from 45 yards out.

The visitors had plenty of pace up top with Reid and Topi Obadeyi buzzing around and they almost caught the Reds out on the break as Obadeyi got beyond Hunt but Buxton was there to throw himself in the way of the striker’s effort.

Reid would threaten next for the Pilgrims as the 18-goal marksman superbly brought down a cross from Conor Hourihane and got a shot away but Marcus Bettinelli stuck out a leg to keep the scores level.

Tom Aldred, fresh from scoring his first Stanley goal in midweek, almost scored again but his header was cleared off the line by Andres Gurrieri. From the counter-attack, it took a superb sliding challenge from Molyneux to deny Hourihane a chance to square into a crowded penalty area.

From their next attack, the Greens would take the lead as Reid showed Buxton a clean pair of heels to accelerate into the box and drill a shot through the legs of Bettinelli.

Stanley thought they should have had a chance to equalise immediately as James Gray buckled and went down following a challenge from behind but referee Trevor Kettle was unimpressed and booked the Northern Ireland under-21 international for diving.

Max Blanchard and Luke Joyce had shots from range saved for their respective sides as the war of attrition continued in the centre of the park.

At the start of the second half, Stanley again were left perplexed as to how they were not awarded a penalty. Some neat interplay between Molyneux and Buxton set the full-back away and he was scythed down in the area but Kettle simply gave nothing.

A Nicky Hunt long throw caused chaos at the back for Plymouth but the ball wouldn’t sit for Peter Murphy to have a strike at goal and the chance went begging.

Visiting skipper Hourihane had a shot from 18 yards tipped wide by Bettinelli before Neal Trotman put a pair of efforts wide and then over as John Sheridan’s men tried to double their lead and retain their place in the top seven.

Stanley ought to have equalised when half-time substitute Kayode Odejayi got on the end of a delicious Molyneux cross, but his header was wildly off-target.

It was not to matter, though, as the goal to level affairs came shortly afterwards with just 10 minutes remaining.

Molyneux was involved yet again with his superb delivery perfect for Aldred to rise highest and power a header past Cole to haul Beatttie’s men level. It was a second goal in as many games for the defender, who had previously never scored for Stanley in over 50 appearances.

There was one late chance for the Reds to win it but Josh Windass put a free-kick into the side-netting as both sides had to settle for a hard-earned point.