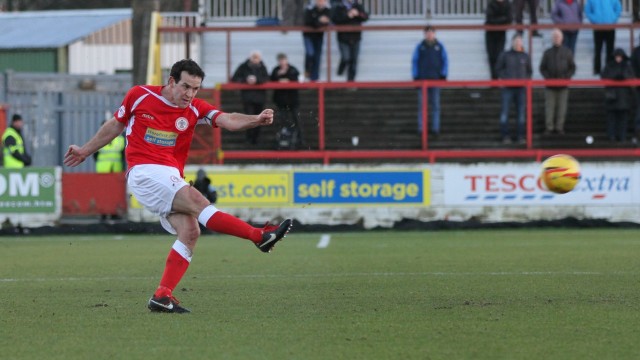 Skipper: “This is a Great Game”

The Stanley Captain Luke Joyce wants the players to redouble their efforts to defeat Chesterfield tomorrow and pick up a first home win of 2014.

The Reds are underdogs against the League Two leaders and Joyce feels that the Store First Stadium support can prove crucial in helping them take all three points.

“Since I’ve been at Accrington this place has always been a bit of a fortress and we’re determined to get back to that,” said the midfielder. “We’ve got four home games out of the next five and that gives us a real chance to change things and get on a really good run. That’ll also make the league table look better too.

“We’ve not been happy with results here recently but I don’t think there’s any one particular reason for that. Perhaps we’ve let ourselves down a little bit with one or two little mistakes, whether that’s not marking men properly or not starting the games as well as we should and giving the opponents head starts.”

25 points and 22 league positions separate the two teams ahead of kick off but Joyce doesn’t see taking on the team setting the pace in the division as a daunting prospect.

“This is just a great game all round,” he explained. “You always want to test yourselves against the best sides and Chesterfield are top of the league for a reason. We felt a bit hard done by when we played at their place and lost 1-0 so we want to put that right.”

The game also sees Stanley’s two previous managers return to the Store First Stadium with Spireites boss Paul Cook and his assistant Leam Richardson taking their seats in the away dugout.

Joyce served as skipper under both bosses but insisted there would be no special treatment meted out for the duo come 3 o clock tomorrow afternoon.

“It’ll be nice to say hello to Leam and Paul but at the same time we’re here to do a job and we want to take the three points from them,” he explained. “We’ll wish them all the best after the game but we want to beat them.

“Having worked under both of them I know that they’ll feel the same; they’ve got ambitions for the season and they’ll want to beat us not because of who we are but because they want those points. The motivation for us is to look after ourselves, do our own jobs and stop that from happening.”