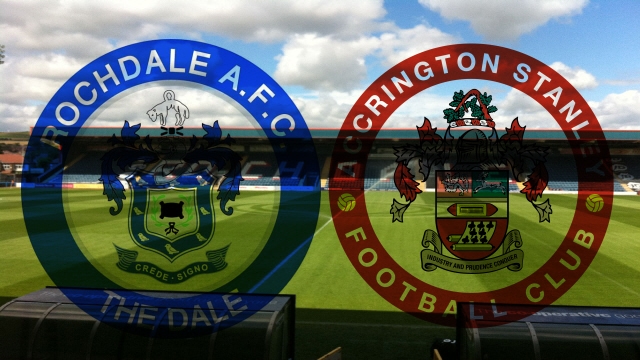 Rochdale were formed in 1907 and were included in the new Third Division North in 1921. The club were then relegated to the basement division in 1959.

In the 2009/10 season Dale were promoted to League One for the second time in their history, before being relegated back to League Two at the end of the 2011/12 season.

44 year old Hill is in his second spell as Dale manager, having re-joined the club in January 2013. He originally started his managerial career at Dale between 2006 and 2011. Hill then had a spell as Barnsley manager between 2011 and 2012 before re-joining Dale last year.

Prior to being a manager, Hill had a successful playing career appearing for a number of clubs, including Blackburn Rovers, Plymouth Argyle and Rochdale.

29 year old Henderson will be expected to build on his tally of eight league goals in Scott Hogan’s absence if Dale are to get promoted this season.

Henderson signed for the club last summer from Colchester United and has also had spells at Norwich City, Luton Town and Northampton Town in his career.

The sides have met on 77 previous occasions, with Rochdale holding the advantage with 41 wins to Stanley’s 25.

Rochdale won 2-1 at the Store First Stadium earlier this season but the Reds were 3-0 victors on their last visit to Spotland thanks to two goals from Lee Molyneux and one from Rommy Boco.

Dale have had an excellent season so far, currently sitting in third place in the League Two table. They have so far picked up 12 wins, two draws and four defeats from their 18 home league matches so far this season.

They are without a win in their last two games and were beaten in midweek by bottom club Torquay United.

Stanley are unbeaten in their last two following the win over Chesterfield and midweek draw with Hartlepool.

James Beattie’s side sit 21st in the League Two table, four points ahead of the relegation places and three behind Newport County who sit 14th.

Nicky Hunt and Peter Murphy return to the Stanley squad after serving their suspensions during the last week.

Defender Michael Liddle is continuing his recovery from a minor hamstring problem.

Other than long term injury victim Marcus Carver there are no other injury concerns.

Dale have played at Spotland since 1920, with the current capacity of the ground being 10,249. The record attendance that the club has achieved was set at Spotland in 1949, when 24,231 watched Dale’s match against Notts County in the FA Cup.